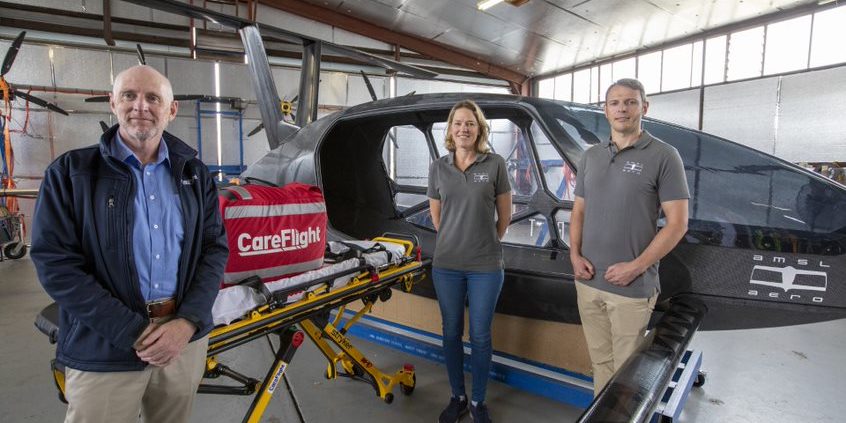 The vertical takeoff and landing (or VTOL) vehicle — a flying car — is under development through a two-year CRC-P project, supported by a $3 million grant. It is led by AMSL, with partners CareFlight, University of Sydney and Mission Systems.

According to a statement from CareFlight on today’s launch, the zero-emission vehicle’s cruising speed is 300 kilometres per hour and its range 250 kilometres (electric-powered) or 800 kilometres (hydrogen-powered).

Co-founder Andrew Moore said the potential applications were vast, but they have initially targeted the area of greatest current need: providing rapid access to medical services for vulnerable remote, rural, and regional communities.

The Australian invention could “transform patient outcomes in vulnerable regional and remote communities,” according to CareFlight CEO Mick Frewen.

“Unlike aeromedical planes that require a runway, Vertiia will carry patients directly from any location straight to the hospital, significantly reducing the complexity and time transporting vulnerable patients. It will also be quieter and safer than helicopters, and will eventually cost as little as a car to maintain and run, transforming aeromedical transport into a far more affordable, accessible, safer, and reliable option,” said Moore.

“Australia’s expansive geography and low population density makes this technology especially valuable, with other crucial applications including airlifting people during bushfires, or transporting rural patients for preventative healthcare and testing, instead of waiting until the point of critical illness, injury, or risk of death.”

“Being the most efficient eVTOL in the world, it also creates a tremendous opportunity to provide zero emissions air transport solutions.”

The statement said CareFlight could deploy the vehicles “within a few years” and that these would be piloted by the organisation’s pilots.

Below is a fact sheet provided by the company