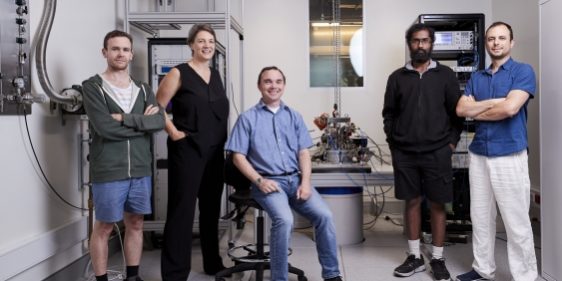 Quantum computers where information is stored at the sub-atomic level are edging closer to reality scientifically, and in Australia, industrially.

The University of New South Wales has announced a team led by Professor Michelle Simmons has demonstrated a compact sensor for accessing information stored in the electrons of individual atoms.

Simmons is a world-leader in embedding and retrieving quantum bits (qubits) of information stored in individual atoms.

This is the next frontier of computer miniaturisation.

“To monitor even one qubit, you have to build multiple connections and gates around individual atoms, where there is not a lot of room,” says Professor Simmons.

Now her team at the Centre of Excellence for Quantum Computation and Communication Technology has been able to reduce the number of gates needed to two.

“This represents a major advance in how we read information embedded in our qubits,” says Professor Simmons. “The result confirms that…reading of qubits is now reaching the sensitivity needed to perform the necessary quantum error correction for a scalable quantum computer.”

Its goal is to produce a 10-qubit demonstration device in silicon by 2022 as the forerunner to a commercial scale silicon-based quantum computer.

The company’s Black Opal software package aims to help businesses that are working on quantum computing processes to eliminate errors and improve the strength of their hardware.

A quantum computing industry would be an exciting development, given only one company, Brisbane-based Sillana, manufactures silicon chips locally.

It operates a silicon wafer facility at Homebush in Sydney, with its chips featuring in leading edge systems such as NASA’s Mars Curiosity Rover.

Picture: UNSW/Professor Simmons and some of her team