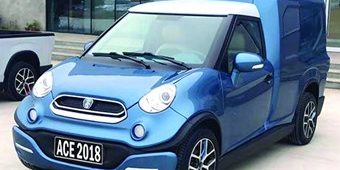 To the optimists, there are reasons why electric vehicle manufacture in Australia is a real possibility.

Greg McGarvie, the co-founder of ACE-EV Group and GetGreen, is one of them.

“You haven’t got the complexity of an auto industry trying to reinvent itself,” he tells @AuManufacturing.

“We’re using a very strong technology. It’s proven and it’s inexpensive; it’s not a labour-intensive thing… If we end up with full manufacturing as a final result, it’s easy enough to have assembly pods set up all over the country.”

ACE-EV began when McGarvie and other co-founder (and co-founder of energy management business GetGreen) Will Qiang were dealing with Chinese investors in a solar farm project. The possibilities of EV manufacture came up and the investors suggest the GetGreen duo meet Taiwanese engineer and inventor Dr Charles Kung.

“He was chief engineer for the high speed rail that runs the length of Taiwan… and recently, with SeeMore Technology, his business manufactured and developed a device for vehicles to travel at high speed in fog. So basically, an eye that sees through fog.”

Kung also had an idea that might be introduced to Australia and allow, best case scenario, for the eventual manufacture of electric cars here.

According to ACE-EV, which is currently holding a funding round, the approach uses a carbon fibre “skeleton” (common to each of the company’s three vehicle models) and only 72 parts in total. Panels are made of ABS plastic. The design allows for easy customisation, and the company won an Innovation Award from MTA Queensland last year. 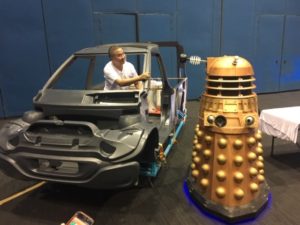 “You’ll be able to say, ‘I don’t want a van anymore, I want a ute,’ and it’s just a skin change and some modifications that we’ve got to do,” says McGarvie.

“The skeleton is common to them all.”

Kits can be flat-packed and shipped, with the first 100 vehicles to be made at a partner’s factory in Shandong Province, China, and then assembled by Fraser Coast-based ACE. Parts are glued together, which McGarvie likens to the adhesive bonding used in the Boeing 787.

The company says profitability can be achieved with low volumes and few staff. To tool and train up for Australian assembly would only cost $11 million, with only 20 staff needed to produce the first 100 vehicles, and an extra five employees per each extra 500 vehicles made annually.

“The goal is to send our process engineer and a few of the employees over there to work on the production line in Shandong,” adds McGarvie, who is looking to export if the company is  successful.

“Then that process engineer comes back and reconfigures that for Australia, and Charles [Kung] and his technical team will come out here and assist in setting that up.”

“Our focus for Australia is a minimum of 3,000 vehicles a year; we think that’s pretty achievable considering the volume of vehicles [sold] here, but our real interest is the overseas market and being able to push out 15,000 units a year at the early stages.”

ACE-EV has the rights to build right-handed versions of Kung’s invention, and sees opportunities to sell cars in flat-packed kits to markets including ANZ, Japan, South Africa and India.

The four vehicle models have a range of about 350 kilometres and a 40 kilowatt hour battery.

The price will be roughly $40,000 to own outright, including a charger and an app that will allow owners to make money through Airbnb-style sharing of their charger with other EV owners.

Along with other EV enthusiasts, McGarvie says there’s an urgency for Australia to play a part in the fast-growing global market. Forecasts from Markets and Markets are unit sales growing by 32.6 per cent annually to reach 10.8 million by 2025. 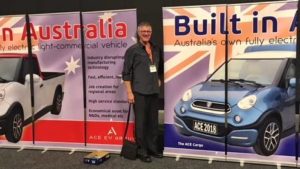 Adoption within Australia has lagged the rest of the world, with only 0.2 per cent of new car sales last year being electric, compared to a worldwide average of 2 per cent. About 3 to 4 per cent was the figure in China. Reasons cited for Australia’s slow uptake have included range anxiety, price, and a lack of both charging stations and government incentives.

There have been exciting announcements over the last year around the possibility of an Australian-made electric car, but the country remains a taker (in tiny quantities) rather than a maker of EVs.

However, ACE-EV will hold its National Launch in April, and aims to begin assembly in Q4, and SEA Electric plans to assemble EV vans in the La Trobe Valley in late-2019. This year could offer validation for the optimists.