Australia’s economy under threat as national innovation slips yet again 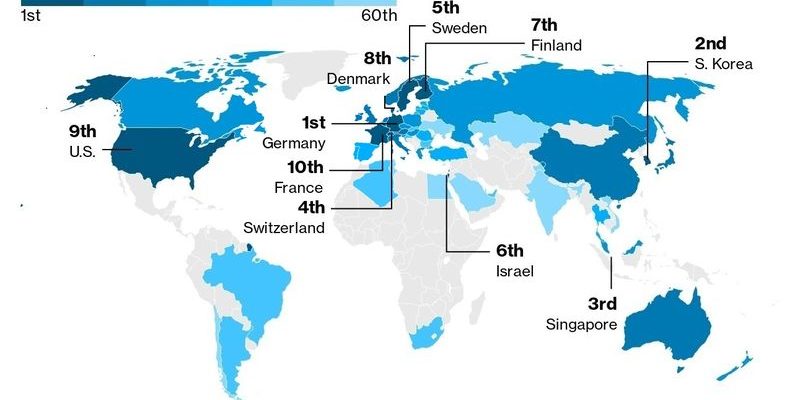 Australia’s slide down the list of leading developed nations has been dramatically confirmed with the Australia Day weekend coinciding with evidence of a fall in our national innovation effort.

The highly respected Bloomberg innovation index saw Australia slip to number 20 in the world on its ranking of innovation (table below).

Australia just pipped that innovation powerhouse Slovenia which came in at number 21.

This puts Australia in the lowly position of other English speaking countries Canada and the United Kingdom, and far behind the leader Germany and number two nation, Singapore.

Germany scored three top-five rankings in value-added manufacturing, high-tech density, and patent activity, helping it to displace South Korea in the top spot where productivity has been in a slump.

It is on the detailed criteria that Australia’s poor performance will most worry readers of @AuManufacturing.

Bloomberg rated Australia as number 55 in terms of manufacturing value-added.

On this score New Zealand fared even worse – falling manufacturing value-adding saw it fall to number 29 on the overall innovation scale.

In other areas Australia was:

# And number 33 for the efficiency of our tertiary education sector.

These are shocking measures of key areas of the soundness of our economy and the future prospects of the world’s 12th largest economy.

They follow numerous global comparisons which paint a picture of a nation dependent on undifferentiated commodities that require minimal inputs of technology and skills.

We are happy to muddle along importing complex goods and services and producing little that requires more than spending the proceeds of our natural mineral and energy wealth.

Well time is up for Australia’s muddle through and leave the clever stuff to others mindset.

Our coal and gas exports are likely heading for a fall as other nations reduce their greenhouse gas production.

And then what? With little manufacturing to speak of we can be wealthy by going to the beach and playing cricket?

We need to wake up and get our act together before the decision is forced upon us.