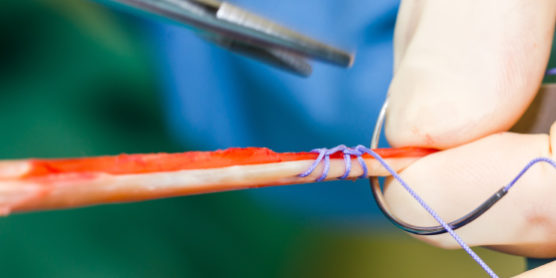 A homegrown solution aims to use kangaroo tissue to improve on current options for ligament surgeries. Brent Balinski spoke to Dr Nick Hartnell of BLT about the project’s progress.

There was no Eureka moment for orthopaedic surgeon/inventor Dr Nick Hartnell, merely “a crazy idea that just might work.”

He’s been thinking about the possibility of kangaroo tendons in orthopaedic surgery for over a decade, but in 2016 decided to take his notion to a lab at the University of Sydney.

“I just thought, ‘I’ve got to put this idea to bed, or else I’ll regret not exploring it,’” he tells @AuManufacturing.

“I essentially said, ‘what I want to do is just make sure this doesn’t work, because I want to get on with my next idea.’ [Laughs] Anyway, they came back and said, ‘this tissue is unbelievable.’ And that’s how we started.”

Hartnell works with a lot of sports injuries, and a fair representation of anterior cruciate ligament repairs.

For this fairly common injury — around 15,000 are performed a year in Australia alone — there are no great choices. Synthetic replacements were all the rage a decade ago, says Hartnell, but aren’t trusted after a high number of failures. Options are generally tissue from a cadaver (there are shortages at tissue banks), a donor (often a parent) or the patient’s own body.

“A 13-year-old today, I had to take two of his hamstrings and, you know, they don’t grow back. He’s lost them forever,” he says.

A project was announced in 2018 to help commercialise Hartnell’s kangaroo tendon xenograft. It runs for three years, and involves Hartnell’s startup, BLT, as well as Allegra Orthopaedics and the University of Sydney. It is supported by the Innovative Manufacturing CRC and has an overall budget of $5.9 million.

Dr Nick Hartnell talking about his idea in using Kangaroo tendons for ligament reconstrustions. And Tommy has bad news for Fitzy wanting to get back into the AFL. #TheProjectTV pic.twitter.com/kOoMlszO0q

The project combines preclinical work incorporating both ‘roo tendon and 3D printed screws (used to fix the tendon to bone) made of the porous, biocompatible compound strontium-hardystonite-gahnite.

According to the team, the niche solution could disrupt a global ligament repair market worth around $10 billion annually.

Hartnell says project work has included developing processes to make the implant tissue less likely to be rejected, but still retain the strength of kangaroo ligament. The material must be “de-cellularised,” using enzymatic and chemical treatments, dried and sterilised.

“If you think of collagen as a rope, it’s a long kind of spiral rope, with dotted cells all the way along it,” he explains.

“What we’ve got to do is leave the rope intact, but take those cells out… [the processes are] aimed at denaturing it but keeping its strength and keeping it sterile.”

The project has run ahead of schedule and could be expanded, he says, to include development of a “collagen catalog,” mapping the properties of every tendon in the body, cross referenced to a viable xenograft for treatment.

“I will have a whole catalog of injury versus treatment, which has never been done before, so hopefully that’s going to be written into the program and hopefully something that will be something we can produce,” adds Hartnell.

There are different tendons throughout the kangaroo body, such as those in the achilles, flexors in the leg, says Hartnell, and each could find a different potential match for surgery, for example in repairing a shoulder, knee or ankle injury. Unlike pig tissue — another potential source of ligament xenografts, and which only offers about 3 centimetres of usable tissue at best — kangaroo tendons are much longer and could therefore be more or less made to order.

“It’s gone from one simple idea to great possibilities and fantastic opportunities,” he says.

The plan is to develop products that can be sold in a sterile bag, which doesn’t have to be refrigerated, and can sit on the shelf of an operating theatre in case of emergencies.

Hartnell believes use in humans is not far off, with next steps including small animal trials, likely in rabbits, and then human trials.

“I think we’ll be putting this in our first human patient before 18 months is up,” he estimates.