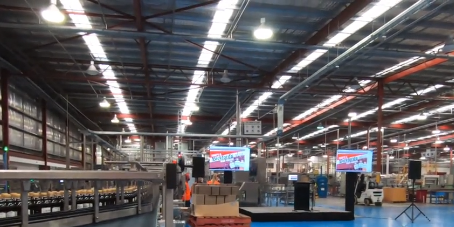 Iconic Adelaide cordials manufacturer, Bickfords has expanded their capabilities with the opening yesterday of a new aseptic bottling line by the Prime Minister, Scott Morrison.

Marshall said: “Bickford’s is now one of only a few bottling companies in the world to utilise this (aseptic) technology.

“It will enhance their capabilities and give them a competitive advantage in the market.”

The company was founded to produce lime juice cordials to supply the fast clippers that sailed the London to Adelaide sailing route in the 19th century.

Today it makes cordials, juice, waters and syrups with a flexible 5-line production system able to fill many different bottle and container types at high speed.

Morrison said: “We are going into our 29th year of consecutive growth in this country.

“And the reason for it is companies like Bickfords that have continued to invest, to train their workers, to expand into new product liners, to seek out new markets.”

The new line at the plant blows, cleans and fills the bottles using a closed and continuous aseptic filling process.