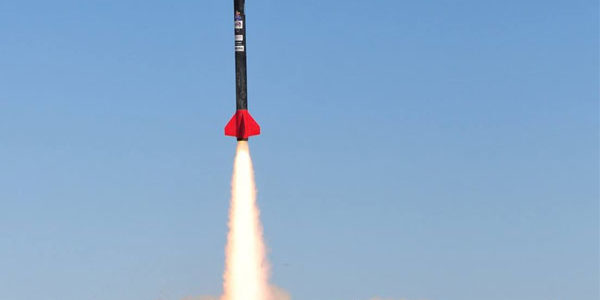 Black Sky Aerospace has successfully launched a commercial payload into space from a site at Westmar, west of Brisbane, aboard its largely Australian designed and made sounding rocket.

The launch was confirmed by Queensland minister for manufacturing, Cameron Dick in a media statement issued at 5.23pm.

“This Sighter190 research rocket is the first in Australia to catapult a commercial payload sky high, and that’s happening right here in our own backyard in Queensland,” he said.

“Black Sky Aerospace is proof Queensland can play a leading role in designing and manufacturing rocket and satellite technologies, including for projects like data collection for the communications, farming and mining industries.”

Blake Nikolic, director of operations, Black Sky Aerospace said once propellant manufacturing was established in Australia the rocket would be fully local.

Parts for the rocket were made by Laser Central and Products for Industry (PFI).

The four-metre long rocket blasted to an altitude of around 17,000 feet and reached 1.2 times the speed of sound at top speed.

Mr Dick said the rocket was carrying a sensor suite from Hypersonix, another leading Queensland aerospace venture which has grown out of work at The University of Queensland.

Sensor packages from the Australian Centre for Space Engineering Research and DEKUNU Technologies were also on board Black Sky Aerospace’s rocket.

Black Sky Aerospace Director of Operations Blake Nikolic said: “With a global market worth US$360 billion seeing exponential growth, Australia will naturally benefit by companies like BSA supporting the ever-growing satellite market and beyond.

The launch comes hot on the heels of news that Fleet Space Technologies had two locally made satellites launched from a site in New Zealand.