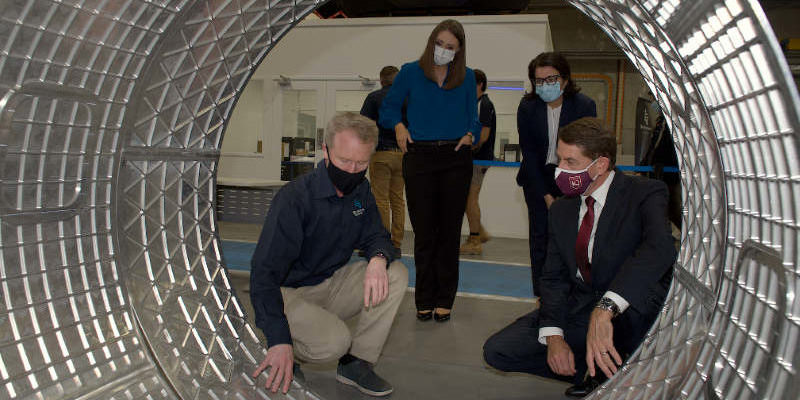 The scale of the federal Manufacturing Collaboration Stream funding was a “once in a lifetime” opportunity for Australia to build “space heritage” into a local ecosystem of space industry component makers and suppliers.

Leading a consortium of 36 space businesses, universities and supply chain companies in support of a $150 million bid for funding through the Modern Manufacturing Initiative – Collaboration (MMI-C) stream, Gilmour Space Technologies chief Adam Gilmour said the program was a “pivotal step” that would give a large number of Australian companies’ direct experience in space.

This so-called “space heritage” was a fundamental pre-requisite for any company to have any chance of joining into global supply chains in the space sector. “Space heritage” was the currency of the global space industry, Mr Gilmour said.

As a supplier, you have to be able to point to your product and show where it has worked in space, he says.

“If you really want to get the Australian space industry embedded into the global space industry, you need what’s called space heritage, in what in the lingo we would call TRL (Technology Readiness Level) 8 and TRL 9” Mr Gilmour told InnovationAus.com.

“Once you’ve gone into space, every one of those companies can then say ‘My product worked in space.’ That’s exactly how the global space market works. It’s the currency of the global space sector.”

• a common test and manufacturing facility, enabling members to advance their space research and technology development at lower cost
• an advanced manufacturing facility for building commercial rockets and satellites, anchored by Gilmour Space
• an orbital spaceport at Abbot Point near Bowen in North Queensland, that will help bring many of these products to space

The ASMN proposal includes participating companies from six states and territories. Gilmour says it is a “genuinely industry-led” project that will provide the framework and infrastructure that can unlock collaborations, create jobs and capability, attract private investment and advance Australian space technologies from initial concept through to commercialisation and launch.

“This is the pivotal step we need to really become a global champion in the space industry, and not a two-bit second player,” Mr Gilmour said.

The only way for the local space companies to build that space heritage into the Australian ecosystem was to do it themselves through a collaborative program.

The “dirty secret” about the large, established space industry prime contractors is that they will not take the risk of engaging smaller Australian suppliers that have not already gone to space.

“They are not willing to commit the capital, or the energy or the time to working with them [smaller local suppliers] to get them to space. As much as the Defence department would like them, they don’t do it,” Mr Gilmour said.

“The way that the primes work is that they wait until you’ve tested in space before they will integrate you into their system.

“That’s why this is so pivotally important. This is a once in a lifetime chance for a whole lot of Australian companies to get a whole lot of components tested together, collaboratively, in space,” he said.

With the resignation of Christian Porter as Industry minister, any finding announcements on the MMI-C projects are expected to be delayed, although Mr Gilmour remains hopeful that decisions will be made and announced by the end of the year.