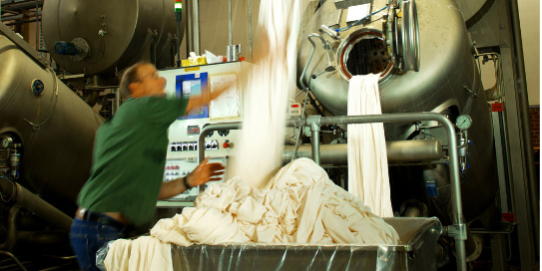 @AuManufacturing has been reporting almost daily heartwarming stories of the heroic efforts of manufacturers stepping into broken import supply chains.

But while a handful have received federal government recognition and support – and featured in endless media releases and media interviews by federal ministers – some have received nothing.

Bruck has been advocating a simple change in defence clothing and textiles procurement that would underpin the sustainability of textile manufacturing jobs and the oft-stated national goal of sovereign capability.

CEO Sandip Ranjan told @AuManufacturing: “Currently only clothing and textiles related to Standard Combat Uniform are classified as Priority Industry Capability (PIC) that requires that the fabrics and uniforms …be woven, dyed, printed and stitched in Australia.

“All other products are sourced from textiles and clothing produced in China.

“Due to this limited sourcing of products locally, the industry suffers when the demand for specific products related to Standard Combat Uniform drops.”

Bruck’s efforts have been rebuffed.

Anna Davidson of Hand Sanitiser Australia faced a different and more urgent problem – a desperate shortage of hand sanitiser manufactured up to the standard required by general practitioners.

Davidson like the rest of the community saw supplies of sanitiser dry up, and while the focus was on supplying hospitals fighting the pandemic and the public queuing in supermarkets – no-one was helping GPs.

Frustrated, she first organised a group of manufacturers to supply enough sanitiser for the 35 medical staff she manages.

Then in a herculean effort she expanded to cover the needs of a 3,900-strong Practice Managers Network on Facebook.

Davidson told @AuManufacturing: “Mera Chemicals and WaterTest Systems together with Manildra Group have been amazing in stepping up from Early March to help our General Practice and other health care providers keep us safe and open.

“But in all this we have had no feedback, no support from the government.”

The group estimates more than $650,000 has been spent gearing up to make hundreds of thousands of litres of sanitiser – this is not the retail product now making it back onto retailers shelves and it is still not available to all GP practices.

Davidson responded to the federal government call for information from suppliers in mid-March which was initially due to close on March 31, then extended until April 8.

“We have heard nothing back from that process, nothing, not one word.”

Davidson requested meetings with industry minister Karen Andrews, then got help from local MPs Angus Taylor and David Littleproud to put the same request direct to her office.

“Their response has been ‘it is an issue for the market’.

“But it is not a market issue.

“We need quality hospital sanitiser not Chinese imports which we don’t know whether it meets standards of efficacy.”

Davidson said her group needed financial assistance – they have received none – if it was to continue supplying GP practices around the country.

Instead she sees a disconnect between government statements that government and industry were working together to solve Australia’s supply issues and the reality faced by her group.

Davidson said: “We can’t cut through – people are screaming.”

Memo to Ms Andrews – perhaps someone from your office might at least meet with Hand Sanitiser Australia?