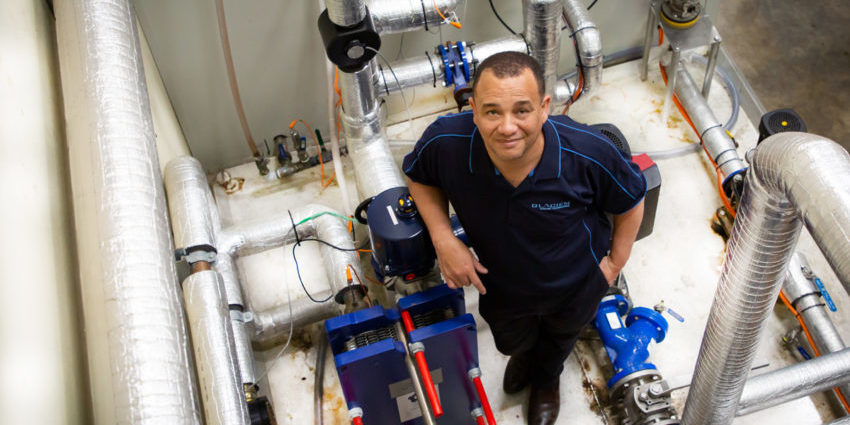 The trial systems will be installed in South Australia at Pernod Ricard’s Rowland Flat winery in the Barossa Valley and Ceravolo Orchards in the Adelaide Hills, as well as in the Reef HQ Aquarium in Townsville, Queensland.

The $4.95 million project will allow Glaciem to field test its Thermal Energy Storage solution in commercial and industrial HVAC&R settings.

Glaciem and the University of South Australia have spent a decade developing a low cost thermal energy storage technology to store and discharge energy using a heat transfer process. This occurs at a temperature suited to the specific application using special material.

The technology has the added benefit of using natural refrigerants rather than commonly used synthetic refrigerants, such as carbon dioxide, which are harmful to the environment.

The air-cooled CO2 refrigeration system has been operating at The Bend Motorsport Park, about 100km southeast of the South Australian capital Adelaide, for about 15 months, providing UniSA and Glaciem with more than a year’s worth of clean data in a commercial setting.

Glaciem CEO Julian Hudson said the three projects all demonstrated different applications across a variety of industries and would provide valuable data to prove the financial model in the field and drive the cost of production down.

“At the end of these three projects we’ll be able to validate the financial models for people to give potential end users the commercial confidence in this technology – it is robust and you can get significant savings by moving over to this platform but at the moment all the numbers we have are just numbers,” he said.

“It also future proofs the investment because there are no synthetic refrigerants attached to it and if you’ve got a cooling and heating process within your business then having a thermal battery with some smarts is a hedge against changes to what the NEM (National Electricity Market) will look like in the future.”

The system will be used for process cooling and is to be powered by the Jacob’s Creek winery’s 2.8MW solar PV installation.

“That’s an interesting scenario because Pernod Ricard have direct exposure to the spot market so that specific project demonstrates how renewable energy, thermal storage and smarts can work when you’ve got spot market access that gives you a technical hedge against the electricity market,” Hudson said.

The Reef HQ aquarium pilot will use the Glaciem’s carbon dioxide refrigeration system and thermal storage to cool a 4 million-litre fish tank and provide heating and cooling to the building. The system will be powered by a 260kW solar PV system. Heat is a bi-product of the cooling process and will be used to help run dehumidification units and to maintain an aquarium temperature of 26-28C for a few weeks a year in the cooler winter months.

“In that scenario it shows how the technology works in a building and also if you are not exposed to the spot market but you’ve got very low exports and demand tariffs,” Hudson said.

“They’ve already got some chillers that are doing the bulk of their air-conditioning so the new system is supplementary to that but is operating on carbon dioxide so will provide a very good comparison to the standard HFC system.”

The Aquarium and winery units are expected to be operational by March 2020 while the apple cold store, which is on a green field site, is not due for completion until the early 2021.

Ceravolo Orchards are looking to build 10 long-term apple stores near Nairne in the Adelaide Hills. The stores will be connected to 500kW of solar PV, heat pumps and 4.2MW of thermal storage.

“They’ll make ice in the day time and use that for cooling during the night and at the same time as they are making ice the system will generate hot water as a bi-product of cooling to wash the apples,” Hudson said.

“They’ll be able to dramatically shift their operational costs by about 90 per cent while avoiding a transformer upgrade along with a range of other benefits.

“So that particular project shows the technology in a greenfield application in a cold store supply chain environment.”

Hudson said Glaciem’s technologies were perfectly suited to Australia but were also well suited for use in many other parts of the world such as the United States, southern Europe and Germany, which was moving towards de-centralised energy grids.

“The industry sector we work in is very under-the-radar but it’s a massive consumer of electricity in Australia and worldwide,” he said.

“It is exciting and when people talk about a low carbon future we believe that all commercial and industrial cooling systems in the future will look like this because the other key thing about combining these three technologies into one is that is actually very well suited to de-centralised grids.”

“These pilot sites trialling Glaciem’s technology will demonstrate that refrigeration equipment, grid supply and on-site renewable energy generation can be reliably integrated across a range of commercial businesses,” he said.

“Helping industry reduce emissions is one of our three investment priorities, and heating and cooling is a huge driver of our electricity consumption including peak demand, which drives higher electricity prices for everyone.

“There are significant opportunities across the heating and cooling sector to reduce energy costs and emissions by combining renewable energy alternatives with innovative storage technologies, and we’re proud to support a homegrown startup like Glaciem do just that.”