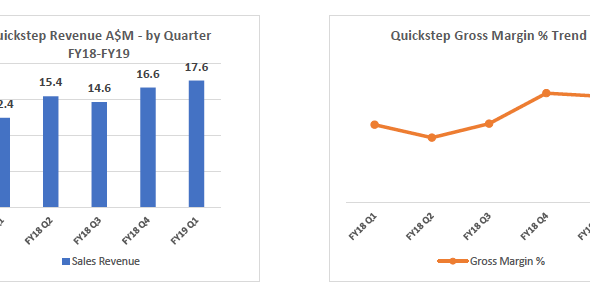 Sydney’s Quickstep Holdings (ASX: QHL) achieved sales of $17.6 million in the first quarter of the financial year, up a massive 42 per cent on the previous corresponding period.
“The business achieved positive NPAT in Q1 FY19 and expects to deliver positive EBIT for the full year FY19. While EBITDA for Q1 was $1.2 million, operating cashflow of $(2.0) million reflected delayed customer payments received in October 2018,”the company said in an ASX update.
“Improvement in gross margin is expected during FY19 as JSF volumes continue to increase and from the ongoing lean manufacturing program.”
During the quarter Quickstep delivered its first parts to Boeing Defence for inclusion in F-15 Lightning fighter production. It also secured a five year contract extension to supply Lockheed Martin with wing flaps for the C-130J Hercules airlifter.
Quickstep says business will continue to improve in FY19 as F-35 JSF fighter component deliveries ramp up towards peak production volumes over the next two years.
Quickstep has made rapid progress since it relocated to the former Boeing/Hawker de Havilland factory at Bankstown in Sydney.
Join the discussion in the Australian Manufacturing Forum here.