Compost bin sensor puts Max on top of the world 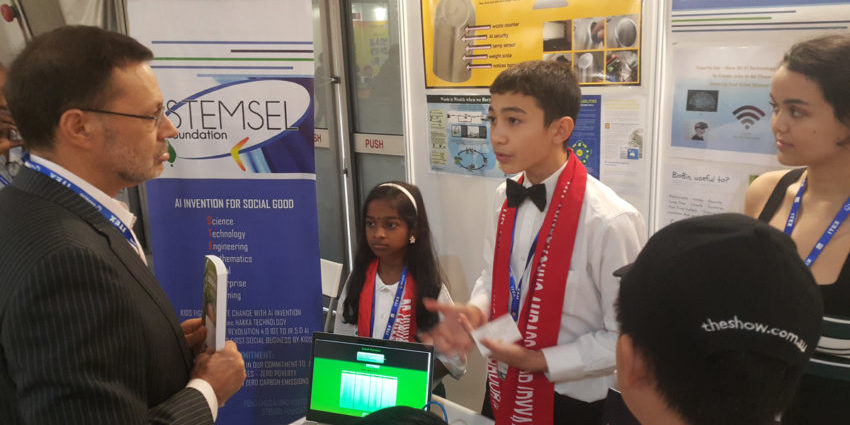 A 13-year-old Adelaide boy has won an international inventors award in Malaysia after designing a Wi-Fi enabled electronic monitoring system for compost bins.

Max Weir attended the Malaysian Invention & Design Society’s World Young Inventors Exhibition earlier this month where his prototype was up against 800 entries from more than 20 countries.

His project titled ‘Kids fight Climate Change with Artificial Intelligence’ was the only entry from Australia in the Secondary Level section of the competition, which he won despite the average age of competitors being 16.

The automated compost bin monitoring system has several features including a light sensor that measures the amount of waste being put into the bin by volume and weight.

It also has a weight sensor that measures the amount of compost being produced through the decomposition process in the bin.

The real-time information can then be viewed on a web page or mobile app.

Max is now working on a system to capture the methane – a greenhouse gas – produced in the composting process so it can be later burned as fuel.

His invention is designed for a BiobiN, a patented system for organic materials developed by Willunga-based Peats Soil.

It also incorporates the locally invented runlinc electronics development platform that uses the internet to allow programming to be done directly onto a microchip. 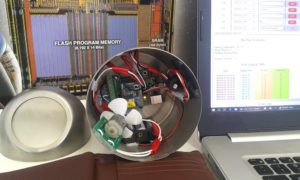 A miniature prototype of the BiobiN.

The South Australian developer of the platform, eLabtronics, says the runlinc invention will soon become the “gold standard” for building electronic devices that draw on internet-based resources.

Environmental group KESAB has played an important role in promoting waste reduction in South Australia for more than 50 years.

“I talked to him about BiobiN and I thought ‘what’s the point in having an automatic composting system without any real time data processing on a web page?’” Max said.

“There’s no real convenience of it if you don’t know how much fertiliser is being produced and when it is finished and that’s when the runlinc application kicks in.

“I would love to work with BiobiN to make a commercial model that’s connected through a Wi-Fi chip to allow people to view it on a web page on any mobile device – it’s such a low cost for a board that lasts 10 years.”

BiobiN commercial manager John Hogarth said he was working with Max to help him adapt his invention to suit a commercial unit.

“What Max has done is technically great, we just have to do a few little tweaks on it so it can be physically adapted to the system to withstand the fairly tough operating environment it needs to work in,” he said.

While in Kuala Lumpur Max and eLabtronics Technology Manager Miroslav Kostecki ran a workshop on the runlinc platform at the Malaysian Global Innovation and Creativity Centre, known as MAGIC.

The workshop was attended by a manager of the Scouts movement in 17 countries who expressed interest in rolling out the runlinc platform across the organisation. Dr Peng Choo and Kostecki started eLabtronics in South Australia in 1994. It launched an education arm called STEMSEL in 2009.

Max started using runlinc when he first attended STEMSEL in December 2017 and has also designed a ‘Smart Beehive’ with a friend that can measure the amount of honey in a hive, bee activity, temperature and the presence of disease using an algorithm without disturbing the bees.

The device will be trialled in the spring when bee activity increases in South Australia.

The opportunity for the Year 8 Glenunga International High School student to travel to Malaysia came after he won the STEMSEL Young Inventor’s competition at last year’s Royal Adelaide Show.

“When I entered (the Royal Adelaide Show competition) I didn’t think I was going to do too well because I rushed to get it done in time and that just shows how easy runlinc is to use,” Max said.

“My goal is not just to make compost: I want schools to be introduced to these types of climate change projects.

“The question is how do we get them involved and if we introduce simple and easy to use applications like runlinc so that they can connect their inventions through Wi-Fi then they can learn quickly, especially in the STEM sector.

“If our generation starts early then just imagine how advanced we will be when we decide to go to uni and it’s just a great way to change the world from a young age.”