Could Australian industry support its own aircraft carriers 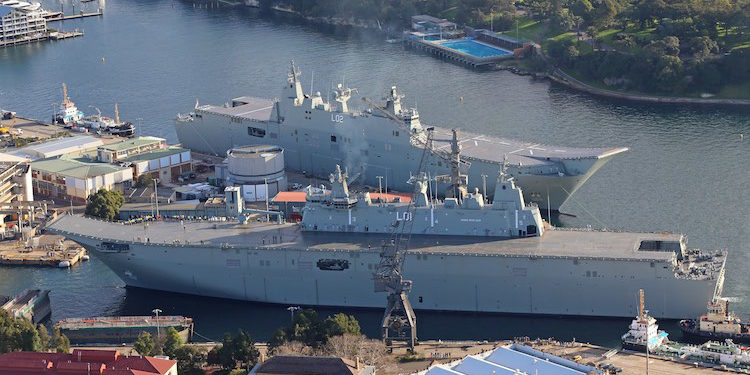 The big question over Australia’s response to China’s rise has broken ground – will Australia move to have its own aircraft carriers?

The question gained new potency with news Japan would upgrade its fleet of fleet of amphibious warfare Izumo class vessels.

Australia operates two LHD amphibious ships, HMAS Adelaide and Canberra, and has based the first of its fleet of land-based F-35s at Williamtown, NSW.

It would be possible for local industry to modify the ships and sustain a small fleet of the stealth aircraft, which also serve to connect and integrate communications and electronic warfare capabilities.

Now Malcolm Davis of the the Australian Strategic Policy Institute (ASPI) has brought the issue to the surface with an article in defence magazine, The Strategist.

Davis said: “The F-35B would give us some clear operational advantages.

“A small force of the jets based on the LHDs could provide a limited level of air support for expeditionary joint taskforces.”

The Adelaide and Canberra should be able to embark 12 to 16 aircraft each, fewer than Australia’s world war two era aircraft carriers the Sydney and Melbourne.

However their role has evolved, and they could operate in company with aircraft, submarines and possibly unmanned assets as part of a coalition surface fleet.

But can industry step up to the task?

Our continuous shipbuilding programme has made shipyards more capable, while involvement in the F-35 gave manufacturers greater capabilities at the cutting edge of technology.

For example, Perth’s Civmec, a capable offshore engineering company, is developing an all new shipbuilding force centred on Perth. And BAE Systems and numerous sub-contractors are building the titanium composite vertical tails for all the F-35’s globally.

However the budget is an issue. There are already concerns a rash of defence orders has over-committed future budgets to equipment spending.

One thing is clear though – defence industry is becoming more capable of playing its role in a self sufficient defence posture.

Picture: Defence/HMAS Adelaide and Canberra at Sydney fleet base