In an exciting development Australia’s CSIRO has begun testing potential vaccines against the Covid-19 coronavirus at its Australian Animal Health Laboratory (AAHL) facility in Geelong.

Testing in the biosecure facility originally built to contain the world’s most harmful plant and animal diseases is part of a global effort led by the interational Coalition for Epidemic Preparedness Innovations (CEPI).

CSIRO was tasked in January with developing vaccines against the virus SARS CoV-2 which is wrecking havoc as it spreads around the world.

In consultation with the World Health Organisation, CSIRO will undertake pre-clinical trials of vaccine candidates from The University of Oxford, UK and Inovio Pharmaceuticals Inc. of the US (US).

The development follows other work by CSIRO which has been scaling up other potential vaccine candidates at its biologics production facility in Melbourne.

CSIRO Chief Executive, Dr Larry Marshall said: “Beginning vaccine candidate testing at CSIRO is a critical milestone in the fight against COVID-19, made possible by collaboration both within Australia and across the globe.

“CSIRO researchers are working around-the-clock to combat this disease which is affecting so many – whether it’s at the Australian Animal Health Laboratory (AAHL) or at our state-of-the-art biologics manufacturing facility – we will keep working until this viral enemy is defeated,”

It shows that Australia does have a role to play in the international stage but this will not be possible if we maintain our naive belief in relying on other nations for critical infrastructure.

And finally it illustrates the cost of policies belittling the efforts of global organisations whose co-ordination role at times of genuine disaster is crucial.

CSIRO is testing the COVID-19 vaccine candidates for efficacy, and evaluating the best way to deliver the vaccine to humans for better protection, including an intra-muscular injection and a nasal spray.

Dew said: “We have been studying SARS CoV-2 since January and getting ready to test the first vaccine candidates as soon as they are available.

“We are carefully balancing operating at speed with the critical need for safety in response to this global public health emergency.”

The AAHL is the only high biocontainment facility in the southern hemisphere working with highly dangerous and exotic pathogens, including diseases that transfer from animals to people.

“In 2016 CSIRO created the Health and Biosecurity research group who work with our scientists at AAHL to tackle our national and international health and biosecurity challenges together, so we can better protect the health of our people, environment, agriculture and industries and our way of life,” 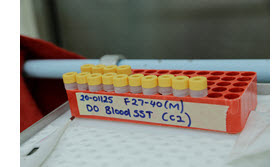