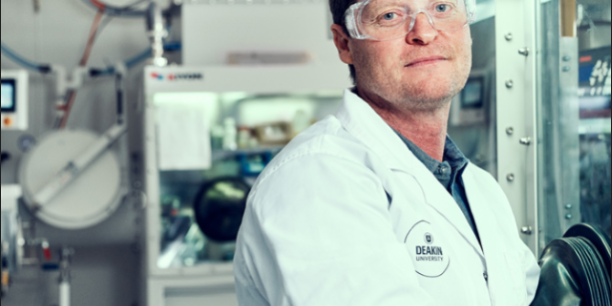 Deakin and University of Queensland researchers have developed a new non-flammable electrolyte material for use in sodium batteries, which they believe is a safer and cheaper alternative to lithium-ion batteries.

Electrolytes in traditional lithium and sodium batteries are commonly flammable, so the discovery published this month in the prestigious journal Nature Materials, could pave the way for a new critical battery material.

Dr Wang said: “Most industries that develop sodium batteries generally use carbon-based electrode and liquid electrolyte, which has low capacity and also can fuel a fire if the battery overheats.

“We are taking a different approach, using reactive sodium metal as an anode to increase battery capacity and in the process are developing safer electrolytes to ensure the safety of sodium batteries.”

A key component in the electrolyte was developed by Dr Cheng Zhang and Professor Andrew K Whittaker based at the University of Queensland’s Australian Institute for Bioengineering and Nanotechnology.

Known as a fluorine-containing polymer and originally used for biological application, this is the first time this class of polymer has been used in solid-state sodium batteries.

According to Wang, one of the main benefits in using sodium as an alternative source to lithium in battery production, is its low production cost.

Dr Wang said: “As lithium could become a rare commodity, the price of lithium batteries is high, while on the other hand, sodium resources are more abundant.

“Our polymer will support the use of sodium batteries, which are low cost when compared to lithium batteries.”

Small-scale testing of the batteries has been successful, with upscaling and prototyping coming soon.

EOS in satellite breakthrough, links with US defence
August 9, 2022
Advertisement