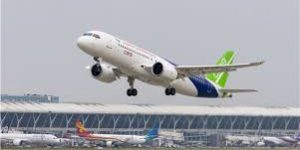 China’s largest aerospace manufacturer will expand on a relationship with Monash University begun in 2017, investing “up to $10 million” establishing a new R&D site at Clayton’s Monash Technology Precinct.

A statement from the office of Victorian premier Daniel Andrews, who witnessed the signing on Thursday in Beijing, said the deal, “will strengthen the existing partnership between COMAC and the Monash Centre for Additive Manufacturing, which tests and develops new metal alloys and advanced manufacturing components for commercial aircraft, making them safer and more efficient.”

The message also lauded the opportunities to increase Victorian exports and freight to China via China’s Daxing Airport, the world’s biggest.

Monash signed an MoU two years ago on knowledge exchange and collaborative research with Comac, which has been producing aircraft since May 2008.

The Sydney Morning Herald points out that cyber-security firm CrowdStrike released a report recently, alleging that Comac benefited from years of state-directed cyber-attacks, IP theft and forced technology transfer. The deal – and the claimed links between the aerospace company and the Chinese government – is a source of unease for some politicians and academics.

Federal education minister Dan Tehan told the Herald yesterday that universities are expected to behave “lawfully and ethically” and “ensure collaboration with foreign entities are transparent, and in a manner that avoids harm to Australia’s interests.”