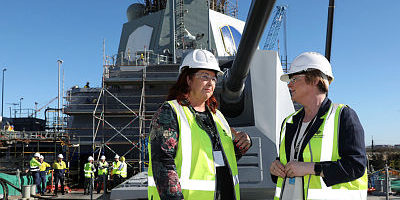 Australia’s defence ministers have confirmed construction is on schedule at the Osborne Naval Precinct in Adelaide for a 2020 completion of the government’s major shipbuilding infrastructure investments.

Reynolds said: “We are now witnessing the future of naval shipbuilding in South Australia take shape, with the fabrication and assembly halls at Osborne South changing the landscape of the Osborne Naval Shipyard precinct.

“When completed next year, Australia will have the most technologically advanced naval shipyard for design and production of our Navy’s future fleet – a significant step in preserving our world-class military capability.”

So far more than 40,000 cubic meters of concrete has been poured for the foundation slabs of massive new ship construction halls, and 25,000 tonnes of steel sourced with more than 58 local suppliers involved.

The government has not made clear whether the steel is Australian made.

The anatomy of Australia’s future naval shipbuilding and maintenance system is becoming clearer now with programmes initiated during the Turnbull/Morrison government now coming to fruition.

South Australia will be home to major naval ship construction with both the $35 billion Hunter frigate programme and the $50 billion Attack class submarine programme committed to the South Australian capital.

Western Australia’s Henderson marine precinct meanwhile will be increasingly responsible for maintenance and sustainment, and construction of smaller vessels, such as the Guardian class patrol boats being built by Austal.

Construction of modules for the vessels will also take place in other locations such as Williamstown in Victoria.

To maintain shipyard employment two Arafura-class Offshore Patrol Vessels are currently being built in Adelaide, before this programme moves to Perth where a further 13 vessels will be completed at Henderson by a joint venture led by Lürssen.