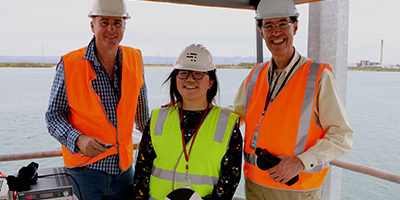 Scientists from Australia’s Defence Science and Technology group have successfully demonstrated underwater detection with a new type of sensor.

The detector, which utilises a cutting-edge single-photon avalanche detector (SPAD) built by a team led by scientist Joyce Mau, has been patented by DST.

SPAD is a solid-state photodetector in which photons of light can trigger a short-duration but relatively large current, making it ideal for low-light conditions underwater.

The detector has been tested mounted on a wharf at Osborne in South Australia.

Mau said: “This is new territory for our SPAD system, so we wanted to make sure we could see through water before more complex at-sea trials.”

Further trials followed at HMAS Stirling in Perth where the SPAD sensor was mounted on the site of a boat.

The original device was based on a chip with a 32×32 pixel resolution, but now the team has begun testing a device with greater resolution of 256×256 pixels.

It is based on a new chip was designed in collaboration with Milan Polytechnic, Monash University, chip fabrication specialists SilTerra, and Germany’s Fraunhofer Institute.

Defence has big plans for producing the device and adding it to their capabilities to detect objects underwater.

“The ultimate operating concept that Mau and colleagues have is for a SPAD sensor and laser system to be mounted on a gimbal on a hovering drone tethered above the ocean surface, scanning the depths for underwater vehicles and sea mines.”

Picture: Defence/Joyce Mau (middle) with colleagues, on trial at Osborne