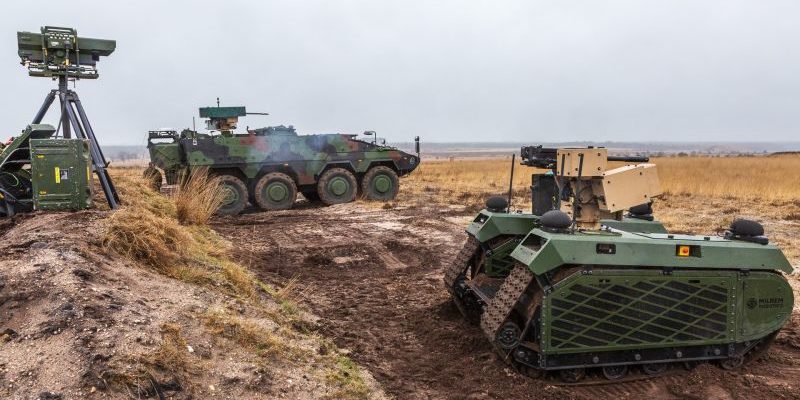 The 13 Lichte Brigade (13 Light Brigade) and the Royal Netherlands Army Staff Strategy and Planning section have demonstrated how remote weapons stations (RWS) manufactured by Electro Optic Systems in Canberra could increase the firepower of its armoured vehicles.

The brigade already has the EOS RWS mounted on the Australian made Thales Bushmaster armoured vehicles it used extensively in the Afghan province of Uruzgan, as well as the THeMIS Hybrid Unmanned Ground Vehicle (pictured nearest camera) being developed by Milrem Robotics

Now tests have been conducted with the EOS RWS mounted on a brigade’s Boxer combat vehicle (pictured at rear) to upgrade its firepower.

The Boxer has to date been relatively lightly armed with a 50mm calibre heavy machine gun.

In trials at the Artillery Shooting Camp, the Boxer tested a 30mm rapid-fire cannon and 40mm grenade launcher mounted on the EOS system.

According to 13 Lichte Brigade: “Because more firepower and combat support is desirable, we are looking at possible addition to the existing armament.

“The aim of this day was to show what the possibilities are to increase the firepower of the Boxer in a relatively simple way.”

The EOS RWS allows soldiers to operate external armament from inside the safety of an armoured vehicle.