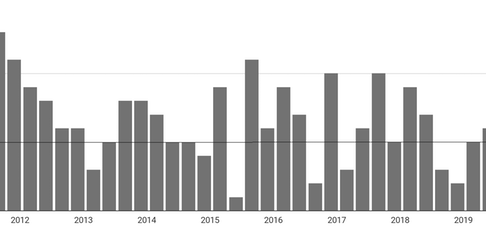 Australia’s three-decade run of near continuous economic growth is set to end, with treasury warning of a hit to growth of “at least” 0.5% in the first quarter of this year, potentially followed by a “prolonged downturn”.

If it came to pass, treasury’s preliminary assessment would most likley mean economic growth vanished and went backwards for several quarters, producing what is commonly known as a “technical recession” – two quarters or more in which economic activity shrank.

Providing the assessment to a Senate estimates committee on Thursday morning, treasury secretary Steven Kennedy said the COVID-19 coronavirus would take “at least half a percentage point” from economic growth during the current March quarter and more beyond that.

In recent quarters economic growth has been about half a percentage point.

Treasury’s preliminary estimate of a hit of at least half a per cent took into account only the direct impacts of the virus on tourism and education, and some exchange rate effects.

It did not take into account broader economic effects or the impact of the coronavirus on supply chains.

The half a percentage point hit to growth would come on top of a hit of 0.2% from the summer bushfires, most of which would be felt in the March quarter.

Dr Kennedy, a former nurse who retrained as an economist, stressed that the impact of the bushfires would extend well beyond the immediate hit to economic growth.

“Evidence from past episodes suggest bushfires can lead to long-lasting physical and mental health effects and destroy cultural heritage,” he said.

“Research by the University of Melbourne after the Black Saturday bushfires in 2009 found mental health problems continued for three to four years.”

The bushfires made clear the increased probability of such events in a world of climate change.

When the virus first emerged in China in December, the treasury saw it through the lens of the 2002-04 Severe Acute Respiratory Syndrome (SARS) pandemic.

It was now clear COVID-19 would be different.

The impact of SARS took on a V shape, a relatively contained reduction in activity, mostly in Asia, followed by a quick bounce back.

The economic impact of COVID-19 is likely to be deeper, wider and longer when compared with SARS.

It will create more risk of a prolonged downturn, and fiscal support will be needed to accelerate the recovery of the economy, especially once the health and health management effects of COVID-19 begin to fade.

The first phase of the economic support package to be delivered next week would target assistance to the businesses and sectors most affected in order to keep people in jobs.

After that, support for aggregate demand (overall spending) would become more important.

“A very substantial part of the impact is actually confidence among consumers and the business sector because of the uncertainty,” Dr Kennedy said.

“Frankly, effective health management will be very important. The economy is actually quite solid. One of the key things will be to to explain to the community how well placed the economy is to manage such a short-term shock.”

The shock would last for some time but the economy would “recover on the other side”.