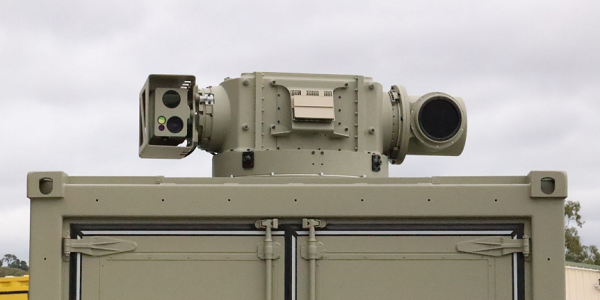 The company’s Titanis system, which has until now been able to engage targets using machine guns, cannon or missiles, has been equipped with a ‘powerful laser’ and has disabled Group 1 drones at an effective rate of 20 drones/minute at ranges beyond 1,000 metres.

Group 1 drones are slower than the Bayraktar drone used successfully by Ukraine, though EOS will further test the weapon against this level of drone capability at a different location given the greater range of effect expected.

Titanis is based on EOS’s remote weapon system (RWS) which is extremely accurate in its tracking and pointing of targets – essential for a laser system.

According to the company: “Titanis is now a proven, integrated defence capability against all drones, providing a seamless integration of command and control, radar detection, tracking, target selection and real-time allocation of a kinetic weapon, DE or surface to air missile to neutralise each drone.”

For the recent test EOS’s laser capability was transported to a remote site using normal military transport and was fully operational within four hours.

the system neutralised a large number of drones under realistic conditions.

EOS Defence Systems CEO Grant Sanderson the introduction of a laser capability gave the Titanis system multiple options for dealing with each type of drone threat.

Sanderson said: “EOS DE systems have already demonstrated the ability to disable or degrade a drone’s sensors to prevent intelligence gathering or precision engagement with lethal force by drones.

“These latest results show that large numbers of drones can be directly neutralised by EOD defensive systems.”

Sanderson said a vast amount of military equipment had been destroyed in Ukraine by drones.

“Drones are highly likely to be used at some time in offensive roles against Australia and its allies, and there is now strong demand for drone defence from customers with current weapons system delivery contracts with EOS.”

The next step in the development of the system will be to qualify it for use with more capable drones, including those which cannot be taken down by missile systems.