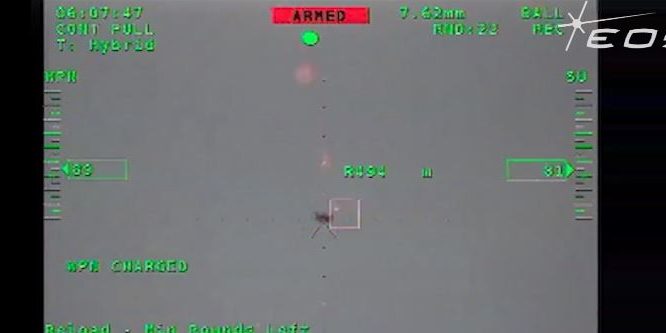 This marks the conclusion of the first stage of the company’s ambitious plan to expand live fire weapon system development activities in Australia.

The R400 remote weapon station is the company’s flagship product and provides for highly accurate tracking and firing from vehicles and other defence platforms.

The company released media including the image (pictured) showing live firing at a UAS target in flight.

EOS has been working closely with weapon and ammunition OEMs and providers, state and federal agencies, equipment providers, and the land owner to create a field firing area suitable for a wide range of weapon systems.

Infrastructure including hard stand firing points and an approved ammunition magazine are established, and range instrumentation including shot detection and meteorological sensors are being commissioned.

Sanderson said: “While we complete our design and development work in Australia, most of our live firing to date has had to be conducted overseas due to the lack of suitable ranges in Australia.

“However the Australian Government’s drive to greater domestic defence capability has provided us with the confidence to invest in the creation of an Australian solution.”

Sanderson said facilities would be expanded to allow for more complex activities over the coming months.

EOS will use the range to live fire a number of its products including the T2000 medium calibre turret and its R400 and R800 remote weapons stations, directed energy weapons, and the Titanis C-UAS solution.