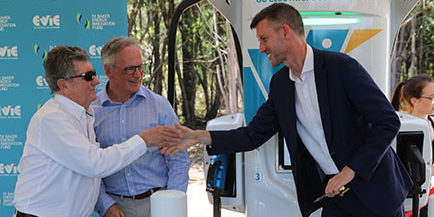 An electric vehicle charging network rolling out a national network of Australian made fast EV charging stations has opened its first charger north of Brisbane as it moves to service the road corridor to the Sunshine Coast.

Evie Networks opened an ultra-fast charging station at Coochin Creek on the Bruce Highway, 60 kilometres north of Brisbane, the first of of an Australia-wide network of 42 stations to be rolled out over the next two years.

The station is equipped with a Brisbane-made Tritium ultra-fast 350kW charger with two charging heads, offering both Japanese and European plugs catering for all available EV models.

These Tritium chargers are the first of their kind globally, and complement a network of 18 EV fast chargers installed in cities up the coast by the Queensland Government.

The 24/7 Coochin Creek station is situated just off the highway and is sheltered by a solar canopy with solar panels contributing additional power to the chargers.

Coochin Creek has the space and infrastructure to support an additional four chargers as Australian EV ownership increases.

Evie Networks is backed by the St Baker Energy Innovation Fund’s contribution of $35 million and a $15 million recoupable grant from the Australian Renewable Energy Agency (ARENA), making it the most heavily funded electric vehicle charging operator in Australia.

Evie Networks CEO Chris Mills said: “This station is the first of what will be the largest rollout of ultra-fast highway charging stations being built in Australia.

“There are currently only around 70 fast charging sites in Australia, most of which are proprietary or require a subscription.

“Providing ultra-fast charging stations at accessible highway locations around the country, all open-access and ‘pay-as-you-go’, like the Coochin Creek, is about serving EV drivers and opening up new journeys.”

For the first month of opening, November, charging at Coochin Creek will be free.

After this, Evie customers will be able to pay via the Evie app, or an RFID card which can be ordered via the app.

Redcliffe resident and Chairman of the Queensland branch of the Australian Electric Vehicle Association Jon Day said: “The new ultra-fast station…really opens up the corridor between Brisbane and the Sunshine Coast for electric vehicle drivers like me.

“It is especially a real game-changer for lower-range electric vehicles with smaller batteries because it means they have an easily accessible 24/7 charging option just off the highway.”

Evie Networks is backed by the St Baker Energy Innovation Fund’s contribution of $35 million, which is accompanied by a $15m recoupable grant from the Australian Renewable Energy Agency (ARENA).

This makes the project the most heavily funded electric vehicle charging operator in Australia.