Today @AuManufacturing’s editorial series Excellence in maritime manufacturing looks at an Australian startup targeting the problem of overheating batteries, and their early work in marine applications. By Tyson Bowen.

One of the great economic opportunities for Australia is in the value chain for lithium-ion batteries.

According to research for the Future Battery Industries CRC, the nation currently captures $1.3 billion in value add annually, focussed in ores, creating 6,000 jobs. With appropriate action to grow manufacturing activity, this could be grown to $7.4 billion a year by 2030, and 34,000 jobs.

Local innovators are looking to different places to contribute to this value chain. One company, Feline, has identified an unmet need for safer lithium-ion batteries by addressing excess heat generated by battery cells. 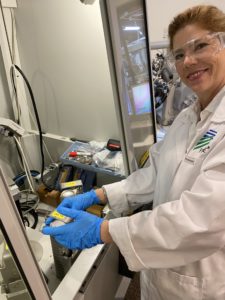 Husband and wife team Dr Kymberley Talbot – a PhD in chemistry and patent attorney – and Professor Peter Talbot – a materials scientist with a lengthy resume covering nanochemistry research in academia and private industry – formed the company in 2016.

“We both violently agreed that one of the limitations to massive uptake of the technology was the cell format,” explains Kymberley Talbot.

“When a battery is asked to do something it’s not capable of, it gets warm. And when it gets warm, it starts to cook itself from the inside. And that’s called thermal runaway. So everybody well understands that this is a limitation that lithium-ion batteries have.”

Within the maritime industry, Feline is initially targeting small, crewed vessels with power packs between 75 and 150 kilowatts, followed by ferries.

“We see an automatic correlation between defence, maritime and then of course export for the marine environment because of the safety requirement,” explains Kymberley Talbot.

The company is currently developing maritime applications of its new cell architecture through a project supported by $272,350 in co-funding from the Advanced Manufacturing Growth Centre (AMGC). Project partners include Defence Science and Technology, and a local engineering firm.

How their innovation works is a secret for the time being, but Kymberley Talbot shares that it addresses the problems of wound format cells, which she compares to the AA batteries you might see in a supermarket.

“And so what we’re talking about is something about 25 times that size, with different dimensions, and it has different internal workings that address the thermal runaway issue,” she says.

“That’s about as specific as I can get at the moment.”

Peter Talbot, who is currently Adjunct Professorial Fellow at Queensland University of Technology and formerly Program Manager at the FBI CRC, adds that their casing is applicable to just about any of the different battery chemistries.

“For example, you’ve got lithium-ion phosphate, which is a fairly safe chemistry,” he explains.

“Typically in vehicles for high energy density, they use nickel, manganese and other compounds in there. So it’s variable, but it’s applicable to all sorts of different chemistries, including lithium sulphur.”

Feline is a supplier to and collaborator with DST Group. It has forward orders for prototype battery packs with Defence, which Kymberley says are currently  being prepared for assessment. 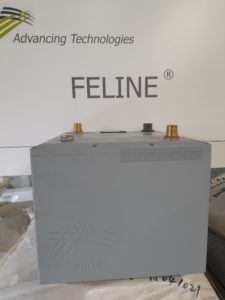 Feline and other companies are helping the nation to add more to the global value chain for lithium-ion batteries, a market which is tipped to grow from US $36 billion in 2020 to between US $133-151 billion by 2030.

Energy Renaissance, another Australian company focussing on safer lithium-ion batteries, opened a pilot factory in New South Wales’ Hunter Region for batteries this year – again with the assistance of AMGC.

The Talbots agree that the potential exists to downstream process more here.

“To be able to use our own sovereign-produced chemicals in Australia that don’t have to be procured from overseas, particularly when they’ve originated from here, is going to be a huge cost saving to us,” says Kymberley.

“There is no downside whatsoever that we see in becoming certainly the global leader of lithium-ion batteries and its supply chain to the rest of the world. We have the greatest resources of lithium in particular. We have every single metal, we have all the minerals. We have it all. We just need to use it.”