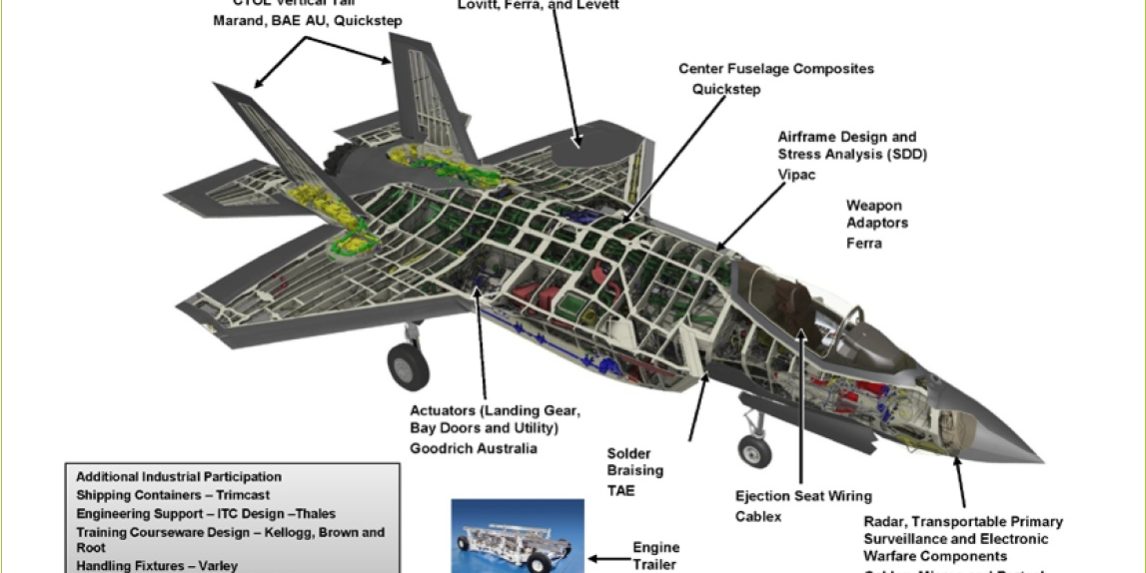 After a fly past along the coast the F-35 Lightnings touch down at 10.00 am allowing Australians to glimpse the world’s most advanced aircraft, boasting an unprecedented level of Australian content.

At the time in 2002 when John Howard’s government invested in the development phase of the F-35, government often bought cheap and off the shelf, and even basic manufactures were 100 per cent imported.

In return for our early investment, Australian suppliers were give a look in to manufacturer Lockheed Martin’s global supply chain, with more than 50 contributing components and sub-systems to the aircraft. The illustration shows the original Australian development partners.

The most obvious is BAE Systems and its partners which will make all 3,000 sets of the complex titanium-carbon fibre composite twin tails likely to be produced for the F-35.

Suppliers such as composite manufacturer Quickstep have been able to parlay this into contracts to supply parts to the C-130 Hercules transport and rocket fairings for European customers.

There was also significant research which did not make it onto the plane. Melbourne’s Adacel developed cockpit voice control software, developing this into voice activated controls for civilian aircraft.

While the Lightning is hardly an Australian plane, it has massively lifted technical capabilities of the firms involved, created unique intellectual property and snared $1.2 billion in contracts so far.

Fast forward to the future submarine debacle where ASC was derided by a federal defence minister as incapable of building ‘a canoe’.

Faced with massive public outcry, especially in Adelaide, this was reversed and Christopher Pyne appointed as our first defence industry minister.

He set about to repeat this model with other major defence purchases, securing significant Australian involvement in projects ranging from munitions production, to armoured steel manufacture and new maritime radars.

SEA Technologies CEAFAR active phased array radar is not only being mounted on all new Australian ships, but it is likely to be used for a new type of frigate being built in the United Kingdom.

Also Canberra’s Electro Optic Systems sells remotely operated weapons to the US Army, BAE Systems its Nulka decoy rocket to the US Navy, and Thales its Bushmaster protected mobility vehicles to seven countries.

It is true there are concerns about the massive outlays inherent in these defence orders and whether they can be afforded in future budgets.

And the federal ombudsman has raised concerns about government restrictions on his ability to comment on any additional cost stemming from one of the recent purchase decisions.

But today we now have a defence procurement policy that aims also to get an industrial dividend from our massive defence purchases.

This is as it should be.

The F-35 flypast route can be found here.