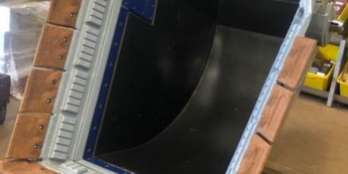 The company, which has established a 100 tonne per year plant at Henderson, has shipped to customers in the UK, Ireland and Germany, according to an investor announcement.

It also revealed formal, long-term supply contracts are being concluded with two key customers in parallel to the initial shipments.

It released a photograph of a graphene-based mining bucket liner ‘to be commissioned’ in the Pilbara, WA.

newGen is also based at Henderson, and is a provider of specialist wear protection and lining solutions for the mining and mineral processing sector.

Wear protection is a major issue for mining, with Australia’s advanced customers in the field emerging as early adopters of the carbon-based nano-material.

Graphene is a super strong, super conductive, and flexible material made from layers of carbon atoms.

First Graphene received the tick for PureGRAPH from approval groups NICNAS and REACH earlier this year.