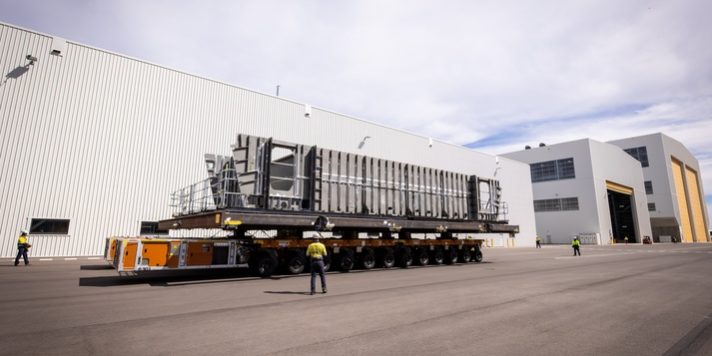 The structural manufacture of the first steel prototype unit for the Hunter Class Frigate Program, the largest surface shipbuilding project in Australian history, has been completed at the Osborne naval shipyard in Adelaide.

BAE Systems Maritime Australia completed the conversion of more than 28 tonnes of Australian steel into the 217sqm unit (pictured), which has a bigger footprint than the average Australian house.

The unit has been moved from the shipyard’s primary manufacturing hall into the next stage of production where it will be outfitted and consolidated – with the addition of three more units – into the first prototyping block.

The prototype unit is one of four in the first representative ship block and is the first to have been blasted and painted, cut and constructed in the new shipyard.

The unit and block are located in the middle of the ship and would contain the officer’s accommodation.

BAE Systems Maritime Australia is building nine anti-submarine warfare frigates for the Royal Australian Navy, with prototyping commencing in December 2020 and more than 1,300 people now working across the program including 35 apprentices and 26 graduates.

Steel for the prototyping phase of the Hunter program has already been procured from Bluescope AIS at Port Kembla, NSW and structural steel from Infrabuild in Whyalla, SA.

The Hunter program has already placed around 40 contracts with Australian businesses to support design and prototyping. Around 20 further contracts will be awarded to support prototyping, including ship outfitting, gaskets, wholeship eyeplates, insulation and deck coverings.

BAE Systems Maritime Australia Managing Director, Craig Lockhart said: “This is a significant production milestone for the Hunter frigate program and an important start towards establishing shipbuilding capability across the Osborne Shipyard.

“Osborne is one of the world’s most technologically advanced shipyards, a purpose-built modern manufacturing facility built for the digital age to deliver next generation anti-submarine warships by a highly skilled Australian workforce equipped to use Industry 4.0 technologies.”