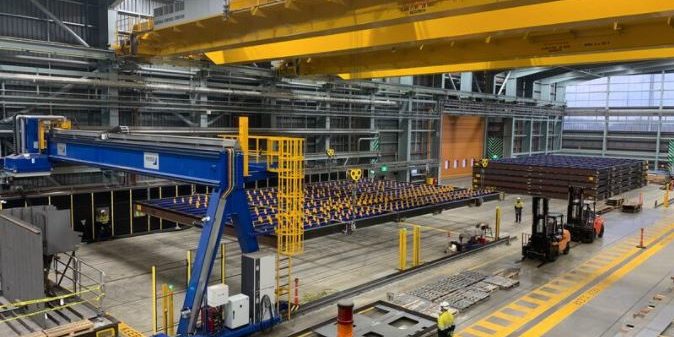 The $45 billion Hunter Class frigate programme has reached a milestone in its development with the completion of a year-long System Definition Review (SDR) which studied how the special requirements of Australia’s defence department can be fitted into the ship’s baseline design.

This review is crucial as the inclusion of the Aegis and Australian Interface Combat Management Systems and the Australian-made CEAFAR2 phased array radar have added considerable weight to the submarine hunter’s design as well as introducing risks in the build process.

The government and BAE have already delayed the construction of the nine ships by 18 months – though prototyping is underway at Osborne Naval Shipyard in Adelaide (pictured) – which is prudent as it is fundamentally important to mature the design as much as possible before the first steel is cut.

The delay has brought criticism, but BAE is using this time to develop the fully digital shipyard and train the 1,300 staff working on the programme, as well as testing innovative manufacturing methods at its ‘Factory of the Future’ and involving 40 Australian contractors early in the process.

The first 28 tonne prototype unit has been blasted and painted ready for outfitting in the Block Consolidation Hall, with work about to start on a second in the Steel Fabrication and Unit Assembly Hall.

This should lead to a more efficient build with less rework and, potentially, schedule compression down the track.

This is one of the key lessons learned from past naval shipbuilding projects. We have to get it right the first time, especially as submarines are proliferating in our region and Australia’s own submarine force faces a parlous future.

Lockhart said: “The selection of the Global Combat Ship for Australia’s Hunter class frigates was based on its digital pedigree, its submarine-hunting capability and its ability to accommodate the changes the Australian customer requires.

“In complex naval shipbuilding terms, a successful systems definition review means that you’ve successfully established a functional baseline from which you can further develop and integrate the design against the Mission System Specification set by the customer.

“It’s taken a lot of hard work and engineering ingenuity to get us to the point where, together with the Royal Australian Navy, we can objectively look at our design and where it sits relative to requirements.”

BAE said that ‘after closing out the actions identified in this review’, Hunter program will progress to the next major engineering review, the Preliminary Design Review, which is a technical assessment that ensures the design is operationally effective, and detailed design and planning can commence.

Looming over the process has been a history of cost escalations in the past brought about by the difficulties introduced defence’s special requirements to existing designs. The Hunter is based on the UK’s Type 26 reference ship design.

That such risks exist with Hunter was on display earlier this month with The Australian publishing a classified ‘Engineering Team Assessment’ for defence which suggested the vessels would be heavier and slower than hoped, and with a shorter range.

A defence spokesperson said: “The risks identified as part of the Engineering Team Assessment are part of an internal management tool used to focus the defence team in managing the design process at a point in time.

“Actions and solutions that address these risks are well underway and form part of the structured design process that will deliver a mature design that meets our requirements in time to start construction of the first ship by mid-2024.”

Dutton said: “The fact is that the concerns that have been raised are being addressed, and the Chief of Navy has been very clear about that.”

The fact is this project is critical to defence and to the South Australian economy, with the Hunter programme exceeding its local content target of 58 per cent.

It is no coincidence that the SA economy is the strongest in the nation, with SME involvement in naval construction driving innovation and jobs growth.

We had all better hope that the various reviews underway really have taken onboard the lessons from past naval shipbuilding projects, and that the additional time now being taken in prototyping has bedded down the design. 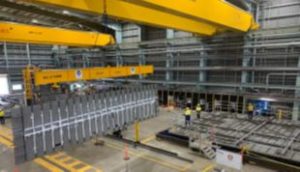