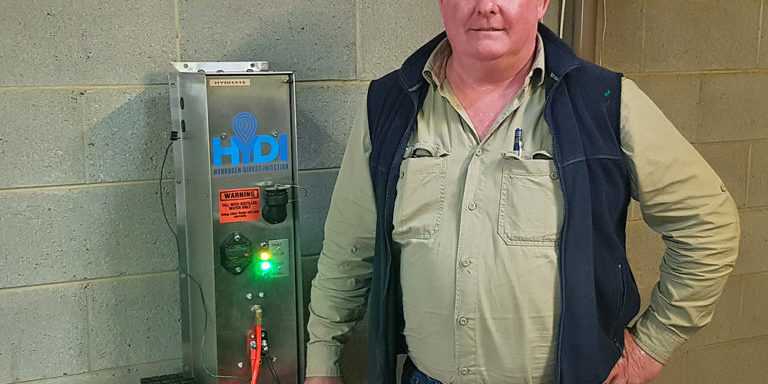 Truckers, miners, bus operators and rubbish collectors across Australia are helping edge a device designed to save fuel and slash emissions closer to commercialisation.

South Australian manufacturer Hydrogen Direct Injection’s (HYDI) systems have been in various stages of development and testing since 2013 but are now on the verge of commercialisation following encouraging testing results from the University of South Australia.

The independent testing on a generator showed the unit reduced diesel consumption in the range of 5–13 per cent, lowered diesel particulate matter emissions by 25–80 per cent and removed 7–25 per cent of carbon monoxide.

The devices are also being tested around Australia on prime mover trucks, public buses, garbage trucks, mining equipment and generators with models to suit engines from six-litres up to 40-litres and beyond.

One truck fitted with a HYDI completed a 50,000km stint on the outback Strzelecki Track in some of Australia’s most inhospitable conditions last summer. 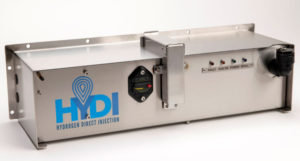 However, he said the chemical-free nature and low power draw of HYDI made it robust, reliable and safe.

“When we got the initial university results about the significant drop in particulate matter, we knew we were onto something,” Wilson said.

“We’re on a sharp trajectory, you only get one chance with heavy industry and we feel like we’re ready now.

“We’ve got about a dozen units out there now, we’ve sold a few and the others are on trial.”

The units vary in size depending on the engine capacity they are serving and can be fitted neatly to the rear of a truck cabin. They produce their own hydrogen through an electrolysis process using distilled water in a two-litre tank that can run for 70 hours before needing to be refilled. An option of an auxiliary tank can also be added for engines that run constantly or in remote areas.

The hydrogen is directly injected into the air-fuel mixture just prior to combustion. The hydrogen helps the mixture ignite faster and more completely, resulting in greater power using less fuel and creating fewer emissions.

The electronics in the HYDI units can interface with a wide range of engines and can alter the flow of the hydrogen according to the throttle position of the vehicle to constantly achieve optimum efficiency.

HYDI is currently based in a small warehouse in Adelaide’s inner-west and has worked with component manufacturers in nearby Woodville, Torrensville and Plympton to supply parts for the units.

It has about 30 units in stock and can currently produce about one a day, but Wilson said the company was looking to move to larger premises and bring some of the manufacturing and assembly in-house to allow it to ramp up production and ultimately look for export markets.

He said based on a diesel price of A$1 a litre, return on investment could be as little as 3 months for an interstate prime mover with two drivers or a 24/7 generator, less than a year for a truck running 12 hours a day, six days a week and about 18 months for a city bus.

“The results have been very promising in Perth, Brisbane and here in Adelaide so we only need one or two of those operators to commit – a large trucking company with hundreds of vehicles or a large mining company – and we will be able to seriously ramp up our production,” Wilson said.

“It is a global product and we will develop an export model, whether we manufacture it ourselves or licence it, that’s a decision we have to make depending on what country.”

Featured picture: HYDI managing director John Wilson with one of the hydrogen units.