Defence equipment supplier GaardTech has launched a range of full size robotic military targets for use in real-world combat training.

The company announced on Linkedin that its full size 3D robotic tank target is now available for viewing at its Brisbane factory.

The tank target is capable of travelling over all terrain at 30 kilometres per hour, and can be operated either remotely or autonomously.

The all-steel target is part of a range of 2D silhouette targets and 3D robotic targets which can be deployed singly or operated in formations.

The target comes in an flat-pack and can be easily assembled on-site.

The company said: “This system enables the complexity and stress of real enemy action to be experienced by the joint force whilst being visually exposed to real-world threats.”

The tank target contains active thermal cells, which can be detected from attacking land and air forces forces.

The tank target was demonstrated at the recent Australian Army and US military Talisman Sabre joint exercise which involved 34,000 troops.

It will also be displayed at the upcoming Defence & Security Equipment International exhibition in Sydney and Europe’s International Defence Industry Exhibition MSPO. 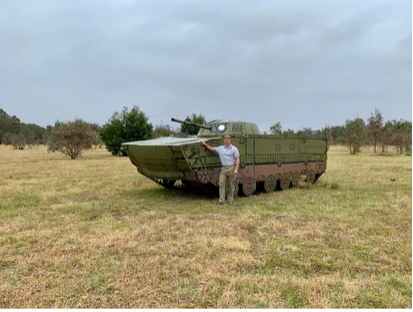 Video of the new tank target can be viewed here: http://ow.ly/yndu30pqZW5