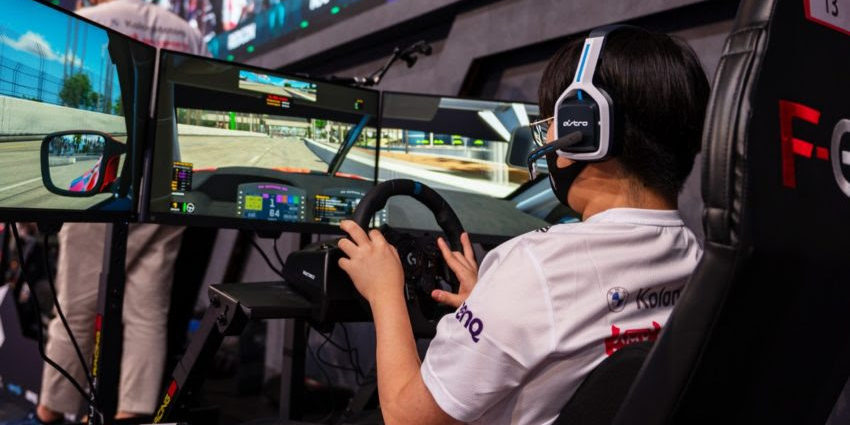 Professional drivers and elite race teams are turning to simulators to stay on track and in peak racing condition as Covid continues to disrupt global motorsports events from Formula One grand prix to the latest Supercar event cancellations at Phillip Island and the 2021 GC500.

So strong is the demand for simulators that it is rallying a boon for sales and the reputation of Australian gaming hardware companies, with an emerging Gold Coast e-sport icon putting the city on the global gaming map.

For Gold Coast-based Next Level Racing, the number of elite motorsport drivers and teams using their simulators for training is driving the company to unprecedented growth.

The company that designs, manufactures and exports racing and flight simulators, has just been named Queensland’s Exporter of the Year.

Next Level Racing Head of Brand and Strategic Growth, Kam Khadem, said the pandemic had helped the company that started in 2010 and was now exporting to 50 countries shift to pole position.

“A lot of them are invested in sim racing in terms of practising and making sure they have that muscle memory still on the track, so that’s a cool thing.”

Through the company’s growing profile, Next Level Racing had partnered with brand ambassadors across the elite Formula and Supercar sectors.

Its distribution has extended to the United States, Europe, Asia and the Middle East as well as throughout Australia and New Zealand.

In the flight simulation space, it supplies flight cockpits to organisations such as NASA, Bristol University’s Department of Aerospace Engineering, and the British and Australian Air force cadets.

This is on top of the racing simulators it supplies to global e-sport events including E3, Supercars eSeries, Gamescom, and the Endurance eRacing Championship.

Khadem said: “In the industry, not a lot of hardware companies come out of Australia, so going into the international market initially a lot of people were sceptics.

“We’re happy we’re changing people’s interpretation of us and of the Gold Coast as somewhere that manufactures and supplies this hardware, and that’s an awesome part of it.”

Gold Coast businesses dominated the Premier of Queensland’s Export Awards 2021 field, with Next Level Racing taking out Exporter of the Year and 10 local companies named as finalists across 13 categories.

The win comes as the company announced it was sending its largest ever shipment to the US, including seven new yachts heading to Miami, Florida.

Five of the motor yachts will be among Riviera’s $20 million fleet of 10 models being showcased at the Fort Lauderdale International Boat Show later this month.