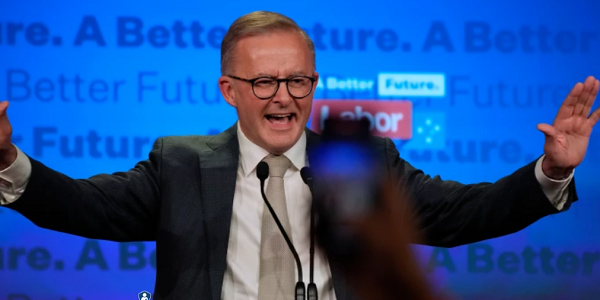 The result of Saturday’s election is not notable so much for the return of a Labor government after nine years, but for a tectonic shift towards progressive candidates with massive implications for a transition from fossil fuels to green industry such as hydrogen and ammonia export.

Climate conservative politicians were swept from the board everywhere on Saturday south of a line in northern Brisbane.

Labor even held onto its Hunter Valley seats, defying former PM Scott Morrison’s best efforts to win them over.

Labor’s greener MPs, if they needed it, have been emboldened and will be joined in pushing for real change by the teals as well as perhaps four lower house Green MPs to take swift action on climate.

Meanwhile in the Senate Labor and the Greens could gain a majority in the upper house, and with a number of climate activists independents have remade that house decidedly green.

Surely we will see the eclipse of the coal and fracking lobbies and Labor’s nervousness about Queensland seats – their victory owes nothing to Queensland – that have held us back for so long in getting serious about emissions reduction.

For industry it has become that much harder for any new coal mines or gas fields of any size being given the go ahead.

Conversely the nascent green hydrogen hydrogen and ammonia production and export hubs that are developing in the Pilbara in WA, around Gladstone in Queensland and at Whyalla in South Australia are set for a boom in the next three years.

Green hydrogen and ammonia are what the world needs – Europe is clearly a massive market waiting to happen while Korea and Japan in our own region have been crying our for green fuels.

This is a tremendous industry and reindustrialisation opportunity for Australia.

Replacing our coal and gas exports with renewables has the potential to fuel a new resources boom – this one based not on finite mineral resources but inexhaustible natural endowments.

If ‘jobs and growth’ has become a rather vacuous mantra of politics today they are on offer a’plenty in renewables.

With the coalition confined to a rump in northern Queensland the coal-focused forces have effectively been neutered – and industry can now focus on riding the great southern and western green tidal wave .