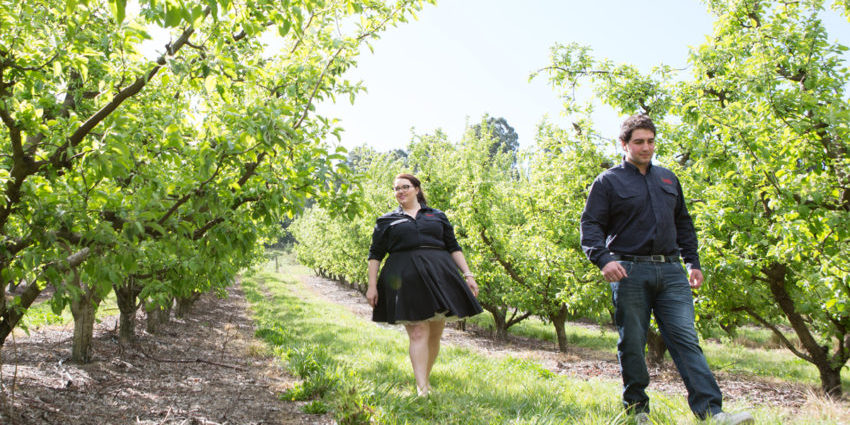 A juice company that began a decade ago with fruit, dreams and no customers has become a national premium beverage brand and is eyeing export markets. By Andrew Spence.

The recent success at Ashton Valley Fresh is being driven by siblings Joyce and Joseph Ceravolo, the fourth generation of Ceravolos to be involved in the fresh fruit industry in South Australia’s Adelaide Hills.

Ashton Valley Fresh was spun out of Ceravolo Orchards in 2008 after consecutive poor seasons forced the family to sell its juicing apples interstate for a fraction of their worth.

But the major growth has taken place since Joyce, 29, and Joseph, 26, took over the reins from their father Tony and uncle Joe in 2013.

Since then, production has grown from about 30,000 litres a year to 4.2 million litres in 2018 and the company’s premium juices have achieved national distribution through Coles supermarkets and several smaller distributors.

However, it is the supply of bulk juice to the craft cider industry that has provided the backbone of the business with about half of total production going to nearby Adelaide Hills business The Hills Cider Company to make its award winning apple and pear-based drinks.

Many thousands more litres are also sold to other craft juice and cider companies around Australia.

Joseph said a major upgrade to the juicing plant, sustainability projects and innovations to improve juice extraction and storage capabilities had been significant factors to the company’s success in recent years.

“When they originally built the juicing plant it was quite small scale but when Joyce and I came on board five years ago we were pretty much at capacity and we still weren’t really meeting the requirements of the customers,” Joseph said.

“So we designed and built the upgrade in the hope that we would double or triple output in five years.

“It was basically a full process upgrade from milling and pressing all the way up to pasteurisation, filtration and tank volume.

“We now produce almost 4.5 million a year and we could probably comfortably do 10 million litres a year.”

The retail range includes 18 varieties of still and sparkling juices in a variety of apple and pear-based flavours. The retail side of the business began as a hobby but now accounts for about 10 per cent of volume, growing steadily at a rate of 15-30 per cent a year. National distribution through Coles has been a major contributor to this.

He said a focus on increasing retail sales in Australia and exploring export opportunities in Asia would be among the goals to further grow the business in 2019.

“We’ve had a lot of interest from the Asian market – China, Vietnam, Japan – because they are looking for high quality products,” Joseph said.

“We’re waiting for the right people to work with and we want their values and interests to be aligned with ours similar to how it is with Hills Cider. We really want to build a relationship that’s sustainable for both parties.

“Domestically there’s still a lot of opportunity but it’s about educating people that it’s not an ordinary juice made from concentrate, it’s a premium juice and everything we do is to maintain quality and integrity all the way through the process.”

The Ceravolo family bought their first property in Ashton where they established a market garden and soon planted their first apple trees more than 60 years ago.

Ceravolo Orchards now span 300ha across seven Adelaide Hills sites and produce apples, pears, cherries, strawberries and nectarines. It also has a packing facility and cold storage, which is also used by other nearby orchards.

Ashton Valley Fresh is vertically integrated with Ceravolo Orchards, providing access to fruit and a network of local growers and suppliers. “Before we had the juicing plant our juice fruit was being shipped interstate and we were making a loss on it,” Joseph said.

“Dad and Uncle Joe decided one year they couldn’t justify sending it, because of the high freight cost and low juice prices, so we fed the apples to our cows and they decided to invest in a juicing plant at the Ashton facility,” Joseph said.

“It was a huge outlay at the time and a massive risk for the business because they didn’t have any customers – they had fruit and dreams.

“We pay growers about 400 percent more than what Dad was getting paid for his juice grade apples before they started AVF. As orchardists ourselves we understand the costs involved in growing seasonal produce and we believe that if you don’t support the growers and do the right thing by them then they’re not going to be here in five or ten years time.

“It used to be very cut throat but we’ve tried to create an atmosphere with the growers where they know they will get the same price for a bin of fruit all year round and because of that our growers are very loyal.”

The first big break for Ashton Valley Fresh came in 2009 when local fledgling craft brand Hills Cider approached the business to trial juice for its ciders.

The two brands have grown together and now a minimum run of 24,000 litres of juice is processed every week for Hills Cider with double or triple runs scheduled in busy weeks.

The relationship with Hills Cider has developed to the point where the two business have teamed up with other craft producers Adelaide Hills Distillery, Mismatch Brewing and winery Vinteloper to this month open a joint cellar door at Hay Valley in the Adelaide Hills.

The Sustainability Award recognises the company’s commitment to achieving zero waste in its juice processing such as water and waste recycling. The Innovation Award celebrated the juice plant upgrade, which includes the installation of an aseptic filler as well as the in-house design and fabrication of an enzyme dosing system to increase juice extraction by up to 7 percent.

Joseph said the Ceravolo family’s history and experience in the industry coupled with the younger generation’s quest for continuous improvement complemented each other well.

“My grandfather would do everything with a shovel and a pick. Then my Uncle and Dad would do it with an excavator. Our generation is now seeking out the latest technologies and innovations to simplify and streamline tasks even further,” he said.

“To do well you need to innovate and it is hard work but modern technology really gives you the opportunity to automate and make it as easy and as sustainable as possible.”