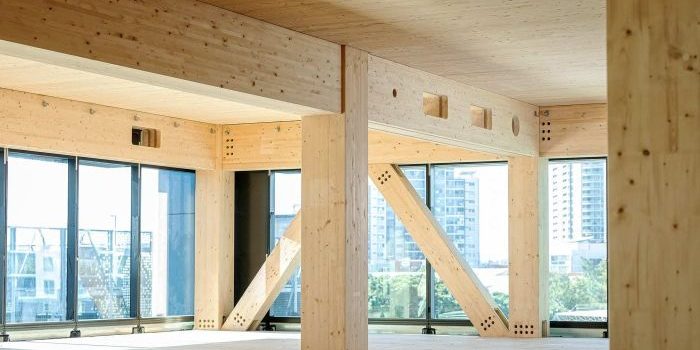 Work is nearing completion on what is billed Australia’s tallest timber building, the 45 metre tall timber framed skyscraper, 25 King Street in Bowen Hills in Brisbane.
Made from giant pre-fabricated laminated timber beams and sections, the building is one of the first of a rash of factory-made timber buildings sprouting up around the country.
Lend Lease has been a leader here with the International House building at its Barangaroo development in Sydney while another in Vancouver, Canada is an incredible 53 metres tall.
The Brisbane building turns construction into a manufacturing and assembly operation, with the building built offsite in a precision factory and assembled on site.
“In this particular building, the columns are set out on an 8-by-6-metre grid such that everything can fit into a 40-foot container. All the elements come out of that container and are bolted together on site,” engineer John McGuire told ABC.
“That is a huge saving on the amount of [building] time on site, the number of on-site staff required, and therefore safety as well. And a minimisation of waste.”
Lend Lease has now established a final-stage fabrication facility in Sydney; and late last year the University of Queensland opened its own independent Australian Research Council-funded Future Timber Hub.
“Our role is to develop not only engineering tools, but also the manufacturing tools that will allow industry to deliver better products,” the Hub’s Dr Cristian Maluk says.
To read Forum comments click here