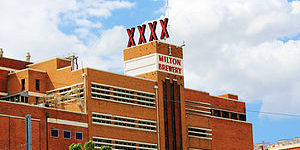 The 141-year-old Castlemaine Perkins Brewery in Brisbane has had its registration extended by 15 years.

In a statement from Queensland planning minister, Cameron Dick, it was announced that the extension was granted under section 267 of the planning act.
“This 15-year extension will give certainty to the company, so it can continue to operate into the future within approved limits,” said Dick, adding that certainty had been provided to the 150 workers at the site.
“In more recent years Milton has seen an increase in new residential and commercial buildings and the urban encroachment registration is about confirming the expectations for the brewery and residents and tenants in the surrounding area.
“The popularity of the area shows that residences and this type of commercial manufacturing can exist side by side, and today’s decision is about ensuring a balanced and reasonable outcome for all parties into the future.”
The brewery dates back to 1878 and founders the Fitzgerald brothers, who moved from Castlemaine in Victoria to brew at Milton, in inner-Brisbane.
The owner of XXXX is food and beverage company Lion, owned by Kirin of Japan, which recently completed a $2 million investment in installing a 690-kilowatt solar energy system on the brewery’s roof. Lion’s other beer brands include Tooheys, Hahn and James Boag.
Owners of the site announced plans to cut 25 jobs late-last year, citing pressures including declines in mainstream beer consumption.
Picture: Wikimedia Commons
Subscribe to our free @AuManufacturing newsletter here.
By EditorJuly 18, 2019
Share this post
Share on FacebookShare on Facebook TweetShare on Twitter Share on LinkedInShare on LinkedIn Pin itShare on Pinterest Share on WhatsAppShare on WhatsApp