How an old video brings home the decimation of Australian manufacturing 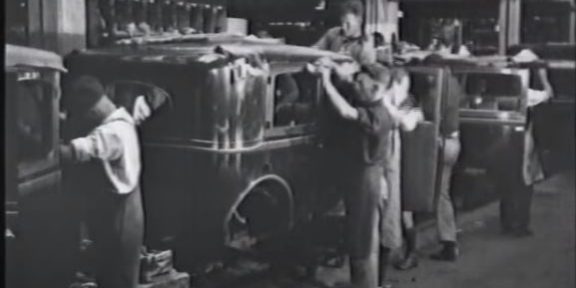 There is a myth, unkind as it is to frogs, that the amphibian when set in cold water and brought to the boil will just sit there even as conditions around it go from bad to worse.

But something similar has been happening to all of us keen supporters of Australian manufacturing as we have gone through an era of de-industrialisation unprecedented to any modern advanced economy.

While gaining advanced manufacturing is essential to becoming an advanced economy, we have become insensitised as we dismantled our industrial structure, so much so that its contribution to GDP has fallen from 25 per cent to just over five.

We have lost one industry after another and there are now whole swathes of industry where Australian enterprise does not exist let alone complete.

There are even more sectors where we have one, or perhaps two small firms hanging on trying to make a living against a tide of imports.

This came home powerfully to me when I watched the innocuous YouTube video here of historic scenes from Adelaide.

I was at first intrigued then shocked (start watching around the 1.00 hour mark) as the video visited factories and showed scale and capabilities that have disappeared or are threatened today – building car bodies at Holden’s Woodville plant (pictured) and steam locomotives at the South Australian Railways at Islington.

Interestingly both factories played a huge part in the war effort in World War 2….and both are mainly empty buildings today.

Adelaide was once the home of Holden, Mitsubishi and Chrysler, of the Hills Hoist and Lightburn washing machine, Scott Bonnar mowers, Perry Engineering, Horwood Bagshaw agricultural equipment and Actil sheets.

For a while it seemed the centre of the manufacturing universe with the world’s largest lead smelter at Port Pirie and the iron ore mines that fed the entire Australian steel industry and BHP steelworks in Whyalla, Port Kembla and Newcastle.

Adelaide was the city where Australia’s first satellites, WRESAT 1 and 2, were built, where even streets in the city were named after household names like Simpson, Metters, Pope, and Clipsal.

Today most of this is gone.

I have been part of the problem here because despite its puny size,. there are some terrific things going on in Australian manufacturing – too much for daily stories in @AuManufacturing to do justice to.

Stories abound, but this daily good news obscures just how parlous is our manufacturing sector.

We have to hop out of the pot before it is too late and halt and reverse this stupid experiment in de-industrialisation.

Watch the video below from about the 1.00 hour mark.