Hydrogen infographic – a big bang or fuel for the future? 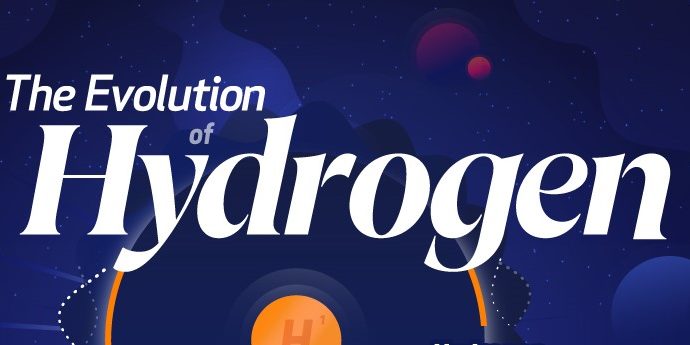 It all started with a bang…the big bang!

The explosive power of hydrogen fueled a chain reaction that led to the Universe we have today.

Now this power is being deployed on Earth to supply the energy needs of tomorrow.

For Australia, solar powered splitting of water into hydrogen, and exporting it to Asia in place of LNG, has been recognised as a potential replacement for our fossil fuel exports.

Today’s infographic comes to us from the Canadian Hydrogen and Fuel Cell Association, and it outlines how hydrogen and fuel cell technology is harnessing the power of the universe to potentially fuel an energy revolution.

With one proton and one electron, hydrogen sits at the very beginning of the periodic table.

Despite hydrogen being the most common molecule in the universe, it is rarely found in its elemental state here on Earth. In fact, almost all hydrogen on the planet is bonded to other elements and can only be released via chemical processes such as steam reforming or electrolysis.

In the early 1960’s, NASA first deployed fuel cells to power the electrical components of the Gemini and Apollo space capsules.

Since then, this technology has been deployed in everything from the vehicle you drive, the train you take, and how your favorite products are delivered to your doorstep.

According to a recent report by McKinsey, hydrogen and fuel cell technology has the potential to remove six gigatons of carbon dioxide emissions and employ more than 30 million people by 2050, all while creating a $2.5-trillion market.

This is technology that can be deployed today, with the potential to transform how we live and power our economies in a sustainable way.