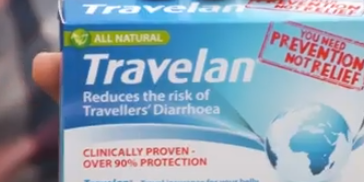 Immuron’s Travelan anti-diarrhoea product has moved to the human clinical trial phase in a program led by the Uniformed Services University in the United States.

Travelan, which is made in Melbourne and on sale through Chemist Warehouse, is a non-absorbable, safe product which is composed of anti-bacterial antibodies that work on the gut immune system.

The USU, which envisages Travalen as a treatment for deployed US military personnel as well as overseas travellers, has begun manufacturing of the product which will be tested against two other non-antibiotic OTC treatment products.

Travelan has already undergone extensive testing by the US Naval Research Centre (NMRC) which reported a ‘robust immune response’ from cows vaccinated with Travelan against Campylobacter and Entereotoxigenic Escherichia coli, the main bacteria causing diarrhoea.

The cows’ colostrum or milk contained high levels of specific immunoglobulins against the target antigens, and antibodies capable of inhibiting the two bacteria strains.

Now USU will trial the treatments and a placebo over 18 months, enrolling 1,336 patients in a randomised, double-blind multi-centre clinical trial beginning in April.