Innovation and productivity forgotten in a wasted decade 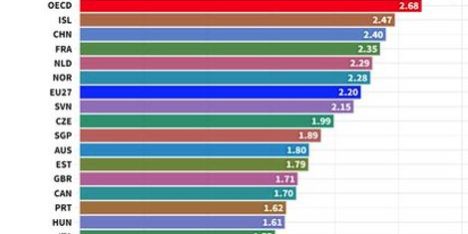 I have lost count how many from prime minister’s down have claimed to be working to make Australia a clever country, a maker of innovative things.

Well guess what, it has all been hot air and good intentions – we have become less innovative year on year throughout the duration of this federal government.

Nine years ago when the LNP came to power in Canberra we were spending as a nation over two per cent of GDP on measurable R&D (it is notoriously hard to measure) and the trajectory was up.

That put us in a pack of middling, advanced nations, a huge increase on the 1990s when we spent closer to one per cent. Since then the trajectory has been downwards.

This is way behind and falling further behind the leaders – unsurprisingly led by Israel on 5.44 per cent, Korea on 4.8 per cent, Taiwan 3.64 per cent and Sweden on 3.53 per cent.

The average spend by OECD nations is the red bar on the graph below of 2.68 per cent, 50 per cent more than Australia.

According to Professor Roy Green: “Australia barely makes the top 25.

” Unless this is addressed, we should get used to sluggish productivity growth and wage stagnation.” 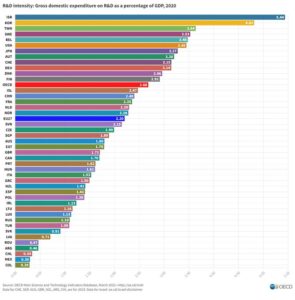 It really does all come down to government policy. We don’t spend enough, and we don’t have the policy settings we need to reverse our innovation deficit and decline.

We had an easy to understand policy position in the early 1990s – a universally available 150 per cent tax deduction on R&D which sent a clear message to business that innovation was critical, and valuable.

Today we have a mish mash of hard to access tax breaks that go only to SMEs and a myriad of grants schemes, poorly executed and under scaled though well intentioned.

Then there is the lack of national institutions driving and co-ordinating innovation – policy and winners are set by those in ministerial offices and a revolving door of ministers.

Only well funded, independent institutions will have the power to make decisions for the public good over time rather than responding to fashion and the news cycle.

Japan has just announced a programme which shows how undersized and scattergun is our policy.

Japan formally launched its first national endowment fund for universities — a ¥10tn ($82 billion) fund that is the largest of its type in the world and, according to those now charged with running it, a clear recognition that the country urgently needs to take innovative competitiveness more seriously.

The creation of the fund, along with plans to create a “University of Excellence” is one of a number of efforts built around the idea that Japan desperately needs to create a financial, structural and regulatory environment conducive to innovation.

And, in an argument repeated in different branches of the government, this should be directed towards solving the problems that Japan, as the world’s fastest-ageing society, faces.

Oh we could wish for more of the same thinking.