How politics might see Austal make a big overseas purchase 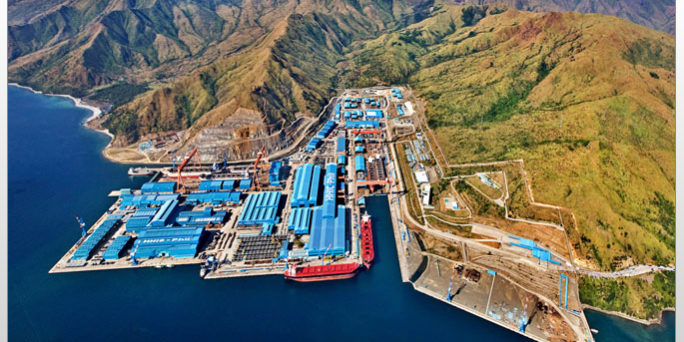 It was only a matter of time before politics and Australia’s expanding defence industry sector were going to mix in the type of dilemma that appears to be facing Australian global shipbuilder, Austal (ASX: ASB).

The company has been named as a possible purchaser of a major traditional shipyard in the Philippines, the former Korean-owned Hanjin Industries shipyard at Subic Bay (pictured).

The Korean shipyard which has built more than 20 container ships, and gas and oil carriers, filed for bankruptcy in May leaving thousands of people out of work.

This is where politics comes in – the rival bidder for the yard is Chinese, a development that has alarmed Canberra, Washington and Manila, which is in dispute with China over islands in the South China Sea.

It is fair to say these governments would be happier if a friendly company from a friendly country such as Austal took over.

Austal has previously told the Nikkei Asian Review it is part of a group including private equity firm Cerberus Capital Management negotiating to take over the stricken yard, which has several ships under construction.

Now Austal has issued a brief media release ‘noting’ this and other media speculation.

The company said: “Austal has made major investments in its Australasian shipyards, including in the Philippines, and is continually assessing opportunities to further expand its operations if they create additional shareholder value.

“However, there is no certainty that any additional expansion opportunities will be either pursued or completed.

“Austal will keep the market informed.”

Critically, the company did not deny it was running the ruler over the shipyard, which was a US naval base until 1992.

Recently the Cebu yard was tripled in size and a small leased operation was established in Vietnam.

However the company is not experienced in building the types of large steel vessels built at Subic Bay.

The only steel vessels it has built are a handful of patrol boats built under an Australian-government contract for supply to Pacific nations.

The Korean and Romanian management at the yard clearly could not manage the operation effectively, and one has to ask how much risk it would entail for Austal to enter an area where it has no particular advantage.

Then again, Austal has made a Philippine shipyard work.

Propelling it to a positive decision are a number of factors.

The Philippine navy is said to be pushing the deal, with the promise of a shipbuilding contract to build patrol boats as well as potential repair work.

In Australia, Canberra has let it be known that hundreds of millions of dollars of submarine maintenance work just might be moved to WA, speculation that has infuriated SA Premier Marshall and SA unions.

Although the federal government has not said so, could sub work be something being dangled by Canberra as a reward for keeping a troubled shipyard out of Chinese hands?

Finally Austal is competing for a massive US Navy shipbuilding contract to build dozens of new frigates.

The US would certainly love Austal to take on Subic Bay, and in the US as we know defence procurement is all about politics.

Austal has been a remarkably successful company, and this is an exquisite decision.

Clearly the Philippine yard is a great prize and likely cheap. But there are dangers in failed assets, and Austal has not got to where it is today by taking un-necessary risks.