Is Industry 4.0 the most important economic and social topic for Australia? 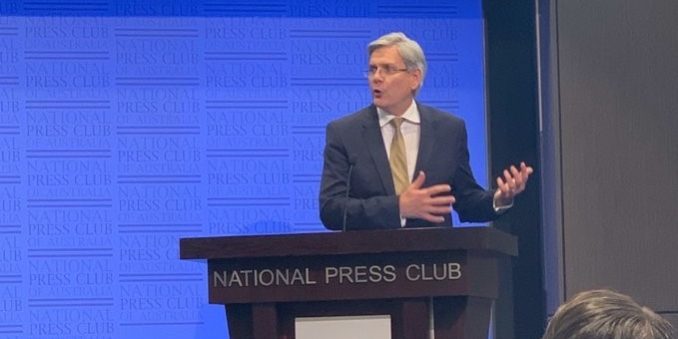 By Jeff Connolly, Chairman and CEO of Siemens Australia & Pacific

Today I spoke at the National Press Club on a topic close to my heart: Industry 4.0.

I opened by saying that the most important topic the nation can focus on is preparing for the 4th industrial revolution – or as the Germans call it, Industrie 4.0.

Many in the room had probably never heard of Industry 4.0 or have limited knowledge on the topic – so how can it be that important? There are many other pressing issues in the media spotlight, like climate change & economic growth. And you might ask, “what about the energy transition, water shortages, population growth, education, scarcity of resources, cybersecurity or globalization?” The list goes on.

But believe it or not, these are all interconnected. And if we prepare properly for Industry 4.0 then we can address all these topics and more.

It is a topic worthy of national attention because Industry 4.0 will dramatically impact the way we live and work in the future. It will impact our entire economy, and even our education system. Professor Aleks Subic, Deputy Vice-Chancellor (Research and Development) at Swinburne University of Technology joined me for the panel session after my speech and discussed a new approach of integrated education and training, as well the role of the national network of university test laboratories in developing full operational Industry 4.0 pilot plants for industry.

In simple terms it’s a description of the transformation taking place in manufacturing – but more so in society – because industrial revolutions have great implications for society.

Now with the fourth industrial revolution we are seeing the merging of physical and cyber worlds. This brings incredible speed and flexibility to all industries. The ultimate difference compared to the second industrial revolution is that through mass production you can produce a single unique product – known as a batch of 1. You get the efficiencies and price of a production line, but your customer gets the benefits of a personalised product.

What are the technologies driving Industry 4.0?

The ability to have a digital twin is at the heart of Industry 4.0:

Other technologies common to the 4th industrial revolution that support the ‘digital twin’ are artificial intelligence, robotics, data analytics, simulation tools, the Industrial Internet of things (IIoT), and 3D printing.

Red Bull Formula 1 racing uses hi-tech industrial software to test ‘virtually’ and simulate 1,000 design changes every week before physically implementing them. There is no room for error – speed and rapid prototyping are critical.

Closer to home, local Australian firm HeliMods, based on the Sunshine Coast, use hi-tech software to create a digital twin of their design ideas. This has enabled them to bring world-first push-button stretcher technology to search and rescue helicopters around the world. This technology shaves valuable seconds off their missions, getting patients to the critical care they need and helping to save lives.

But Industry 4.0 is not restricted to manufacturing…

Both water and power utilities around the world are creating digital twins of their networks. The Manila Water company, based in the Philippines, has a digital twin of its entire network – a virtual model and representation of its physical real-world assets including all pipes, valves and pumps. By using their digital twin they’ve simulated the likely impact of natural disasters and made plans to strengthen and improve their infrastructure.

The company was able to identify around $400 million USD savings in planned capital expenditure. By making their assets tougher and more resilient, the company also saved an annual $30 million off their insurance bill. Australian banks and insurance companies should take note. 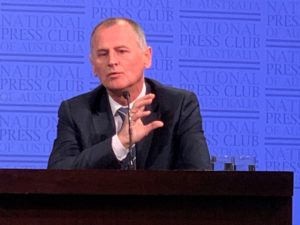 Professor Aleks Subic addresses the National Press Club highlighting the need for rapid transformation in the education sector and greater collaboration with industry.

Last year, the World Economic Forum reported that by 2022, 75 million jobs could be displaced by robotics and artificial intelligence. 2022 is just 26 months away!

If you don’t think this will happen to you, then think again. We are seeing these changes already in many industries. For example, Dulux Australia has built what is considered the most advanced paint factory in the world. It’s entirely paperless and through automation and advanced manufacturing technologies they now have the flexibility to produce specialty batches 1/50th the size and about eight times faster than previously possible. The jobs look different too. About 30% of the workforce are now women. They work in a clean environment with stainless steel and tablet computers rather than heavy labour.

It’s not just affecting manufacturing jobs – it could also potentially be the jobs of everyone, including members of the National Press Club and the Canberra Press Gallery.

While preparing my speech I tested a free online ‘artificial intelligence writer’ by simply typing in the heading …’the fourth industrial revolution’. It took two and half minutes to produce a draft editable article created from around 30 global sources. The first suggested sentence was:

“As we ramp up towards the gateway into the Fourth Industrial Revolution, we can expect an influx of powerful devices, networks, and digital services to reshape our human existence.”

Even an AI writer recognizes that Industry 4.0 will reshape human existence.

Now admittedly it was largely a series of jumbled sentences rather than a story. But the fact is that technologies that come with Industry 4.0 will powerfully change the way we work and live in many ways. And we need to learn how to harness what technology can do to help us be more efficient, more productive and improve the way we live and work.

But before you get too worried about robots taking your jobs, the flip side is that the technology will produce a staggering: 133 million new jobs – which means a net gain of over 58 million new jobs! However, they’ll be different and require different skills.

Is Australia ready for the new types of jobs?

According Australian Industry Group (Ai Group) research, 75% of employers cite a skills gap. They cannot get people with the right skills for the jobs needed. Yet we have over 1 million students doing undergraduate or postgraduate qualifications. We need to urgently narrow the gap between the skills needed by industry and the general outcomes being delivered by our largest educational institutions.

It’s great to see some of our leaders taking note and realising this is an urgent need. We are one of the few nations that has a collaboration agreement on Industry 4.0 with Germany. The Ai Group-led Industry 4.0 Forum, initially set up as the Prime Minister’s Industry 4.0 Taskforce, has a coalition of the willing, leading key workstreams that mirror Germany’s approach to address the transitional needs of the entire society.

We are also establishing another workstream to look at the ‘Legal Framework’ required in an Industry 4.0 world – a sound legal basis is a prerequisite for the digitisation of the entire value chain.

You might wonder why the AMWU is included… that’s because if you don’t bring the people along for an industrial revolution then you may end up with an entirely different type of revolution on your hands.

It’s pleasing that a lot has been achieved – especially given that Industry 4.0 wasn’t on the Australian agenda at all only a few short years ago – but a lot more needs to be done with a lot more people involved and a lot more money invested.

Earlier this month Aaron Patrick, senior correspondent with the Australian Financial Review wrote an article about Australia being rich, dumb and getting dumber. The source was a Harvard University study that ranks Australia economic complexity at a similar level of that of Pakistan and Uganda.

He goes on to say: “The enormous wealth generated by iron ore, coal, oil and gas masks, and probably contributes to, an economy that has failed to develop the industries needed to sustain its position among the top ranks of the developed world.”

This may be somewhat true – but for the first time in our history we now have an opportunity to compete in ways we previously wouldn’t have thought possible if we prepare for Industry 4.0. We can dramatically increase our industrial complexity. The things that may have held us back in the past become far less significant. For instance, the cost of manual labour in an Industry 4.0 world is no longer the largest part of the equation. Because digitalization has no borders, we need to be encouraging businesses and society to re-skill and to make technology capital investments. Then it comes down to ingenuity – and I believe Australia has this in spades.

Australia’s expected economic growth forecast has been slashed for this year and next year as the International Monetary Fund predicts a tougher year for the global economy.

Some major stimulus measures are talked about to address this challenge, with monetary policy, tax policy and new infrastructure projects on the agenda.

These are all valid, but the fact is that we need more than this, especially when we face a 4th industrial revolution. To stimulate economic growth at the very core, we need to get our manufacturing sectors modernised and make capital investments. In this way we then create genuine competitiveness, long-term jobs, better and higher paid jobs, increased productivity, better use of scarce resources, less consumption of energy for greater outputs, and ultimately, economic growth.

Some tens of millions of dollars have been put into funds like the recently announced Manufacturing Modernisation Fund and I congratulate the government for this initiative. But is this enough to really stimulate the economic growth engines that would lead us into the fourth industrial revolution? We need more leaders to think big and think long term.

We need to fundamentally shift the perception of manufacturing in this country.

Despite some of the mainstream media gloom and doom around manufacturing when we exited the car industry, manufacturing is still critical to Australia.

The new world of manufacturing is also far more diverse and attractive. In Germany it’s a badge of honour to have a hi-tech trade and do vocational learning. We need to get Australian families looking with pride and aspiration to get into really ‘cool’ manufacturing jobs.

Given the right confidence and stimulus, most Australian manufacturers have considerable room to grow in developing ‘advanced manufacturing’ characteristics. Currently, just 5% of firms drive 94% of the sector’s entire capital spending and 54% of firms drive its entire R&D spending.

This is why I believe that the most important topic our nation can focus on is preparing for the 4th industrial revolution.

This article originally appeared at Jeff Connolly’s Linkedin page on Tuesday. The original version can be viewed here. It has been republished with permission.