It might look like China is winning the trade war, but its import bans are a diplomacy fail 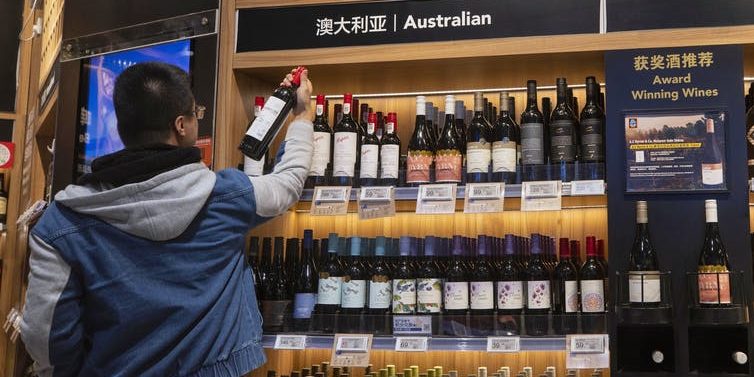 As Australian producers scramble to find markets for goods hit by Chinese import restrictions, it might look as though China is winning the diplomatic war.

But the current situation is a diplomacy fail for China as much as for Australia.

What products have been banned?

In recent months, China has imposed restrictions on an array of Australian imports including lobsters, beef and timber as part of a deteriorating relationship summarised in a list of grievances against Australia.

This has hurt some Australian products, such as wine and barley, which have struggled to find equally lucrative markets. However, some others such as wheat have found new buyers relatively easily.

Overall, Australia’s total exports to China actually increased in December, mainly thanks to iron ore, which China needs too much to restrict.

But while these import restrictions hurt Australia, they hurt China too.

In the short term, Chinese consumers miss out on products they enjoyed, such as premium Australian wine and lobsters, which are valued for celebrations.

Chinese manufacturers that used Australian goods might have to pay more or accept lower quality, such as for barley used for brewing, which hurts their productivity and economic growth.

In some sectors, there may not be enough immediate replacements for Australian products.

For example, coal shortages have led to China’s worst power blackouts for a decade. While import restrictions are not the only factor – and the Chinese government has denied any link – widespread blackouts at the same time as more than 70 coal ships are stuck offshore show how restrictions cut both ways.

In the medium term, other countries watch the treatment of Australia and consider how to protect themselves, so as not to suffer the same fate.

When China restricted sales of rare earth minerals to Japan in 2010, this led Japan to invest in other countries, resulting in a significant reduction in China’s market share.

While I don’t think countries will band together to resist Chinese coercion – they are more likely to help their companies capture Australia’s market share – they may try to slow the growth of economic ties with China, such as through restricting investment in some sectors.

This means Chinese investors may find overseas markets less friendly, as has happened in Australia with much of the economy now unavailable.

In the long term, economic coercion has an impact on China’s international reputation.

Australia is party to two trade agreements with China: the China-Australia Free Trade Agreement and the Regional Comprehensive Economic Partnership. If these do not protect Australia from trade coercion, the message is that such agreements mean little.

Chinese citizens seem to be blissfully unaware of the damage to their country’s reputation. Recent public opinion polling found 78% believe China’s international image has improved in recent years. This is dead wrong.

Comprehensive polling by Pew Research shows China’s international reputation in advanced economies has plummeted over the past decade. China’s assertive diplomacy has been spectacularly unsuccessful as a way of winning hearts and minds.

‘Kill the chicken to warn the monkey’

Chinese thinkers who argue China should show patience and restraint in its foreign policy are not winning the argument in Beijing. National pride and strength is seen as more important than the costs.

Looking forward, China is likely to continue to mete out punishment to Australia for the demonstration effect to other countries. The Chinese have a saying “kill the chicken to warn the monkey”.

But no one should be under any illusion this situation is a good result for China.

Like any downward spiral, both sides have contributed. Worryingly for China, issues that have contributed to the deteriorating relationship — such as cyber attacks, espionage and political interference — are also concerns for other countries.

The unravelling of the relationship in just five years is a terrible result for Chinese diplomacy.

This week, China will celebrate the New Year. China has controlled COVID-19 and emerged with an economy stronger than it was a year ago. China’s rhetoric advocates peaceful coexistence, mutual benefit and win-win cooperation. But when it comes to diplomacy, there is room for improvement.

In the words of ancient Chinese scholar Mencius, there are two ways of being a great power: a “big power” that aggressively pursues its interests through force and coercion, or a “great state” that attracts and gains respect by its virtuous character and consideration of others’ interests.

China’s own self-interest is in the latter.