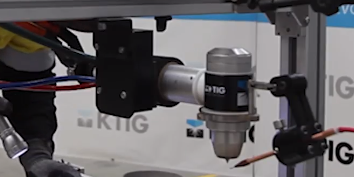 Welding technology developer K-TIG secured a number of new customers for its welding as a service (WaaS) business during the March quarter even as its shares languish on the ASX.

John Zink Hamworthy is part of Koch Industries, one of the largest private companies in the United States.

Primus is a leading producer of large diameter heavy wall pipes manufactured from a range of metals including stainless steel, nickel allows and duplex.

The company has been using the K-TIG welding system since 2018.

During the quarter the company continued discussions in the UK on plans to deliver nuclear decommissioning vessels to the nuclear industry.

It is also undertaking carbon steel welding tests with a number of defence contractors who operate in the armoured vehicle space.

Based on CSIRO technology, K-TIG’s high speed precision welding machines weld up to 100 times faster than traditional TIG welding and twice the speed of plasma welding.

Its WaaS offering to customers enables the company to access long term income as well as selling its Australian-made machines.

K-Tig’s shares have traded as high as 65.5 cents since listing but fell with the onset of the Covid-19 pandemic. They are now selling for around 15.5 cents which values the company at around $17.4 million.