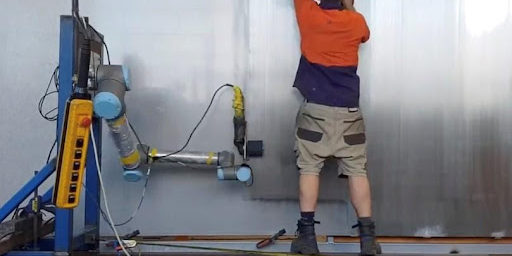 Today Leadership in factory automation looks at the potential of collaborative robots as a low-cost, more flexible and safer alternative to traditional factory robots. By Professor Jonathan Roberts.

Manufacturing in Australia is dominated by small to medium enterprises (SMEs). Many of these businesses are not in a position to adopt mass production manufacturing methods due to the small volumes and large variety of the things they produce. Low-volume, high variability of product is considered a strength of these businesses as long as they can remain cost competitive.

A combination of labour shortages, constantly improving health and safety considerations and the need for increasing efficiency of the manufacturing process are driving some of these SMEs to consider new ways of adopting robotics.

It seems what these SMEs are hoping for is a robot that complements the experience and expertise of their staff, can be used for a variety of jobs, is probably portable within their factories and can be easily reconfigured and set up by the existing staff in their businesses. And of course such a robot needs to be affordable and safe around people. Decades ago this was a pipedream, but things have moved on, and there are some examples of businesses adopting so-called collaborative robots (or ‘cobots’) in this way.

One of the first robots specifically designed and commercially produced to tackle this challenge was the Baxter Robot by US company Rethink Robotics. It was designed to be affordable, safe around people and easy to program – exactly what SMEs now need. The first Baxter was sold in 2011 but it was not a major commercial success. The company developed a follow up robot called Sawyer but it too has not been widely adopted at this time. These types of robots have been referred to as Collaborative Robots and there are now dozens of companies selling similar robots.

Cobots offer a low-cost, more flexible and safer alternative to the robots seen more often in traditional manufacturing settings. They do not need safety cages to keep people away and require less floor space and less infrastructure to operate. A cobot’s light payload capacity means they can be introduced in areas where previously a robot would not have been possible. One example is the food industry where they are now commonly used for picking and placing items into packaging alongside the human worker.

Despite all these benefits, we are still not seeing wide adoption where such robots would need to be moved or significantly reconfigured during a production cycle. The Australian Cobotics Centre has been created to help overcome some of the barriers. Through its five research programs, the Centre hopes to address the technological, design and human factors that are barriers to adoption.

Specifically these programs will address: