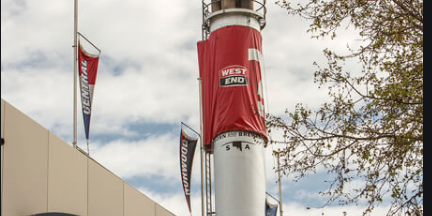 Brewer Lion has announced that it will close the Westend Brewery in Adelaide in June next year and supply the once-iconic beer from its interstate operations.

The brand has a 160 year history but sales have been fading in recent years.

However the decision by Lion, part of Japan’s Kirin, to close the Port Road site with the loss of 90 jobs will likely be the death of the famous brand – South Australians are fiercely proud of their locally manufactured food and beverages.

This loyalty has been challenged in recent years. Despite successful smaller firms the likes of Coca-Cola Amatil have also closed their Adelaide operations in favour of larger factories in other states.

The brewery is a massive supporter of SA football and every year it lights up the banks of the River Torrens with Christmas scenes which attract huge crowds of families with children.

Lion said in a statement: “West End has been operating well below its full production capacity for some time now and unfortunately this is no longer viable.

“We have come to this proposal as the best way to ensure we have a sustainable brewing network for the future.”

The Australian beer market has been in long-term decline for the past decade with per capita beer consumption dropping 20 per cent in this time.

“Our input costs have continued to rise against this backdrop of declining volume, and a further drop in draught beer sales as a result of the pandemic.”

Around a third of employees will continue in sales and marketing roles, with those to lost their jobs able to access outplacement support, and a West End Re-Skilling Fund of up to $1 million.