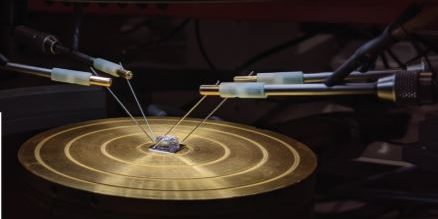 Archer Materials has established chip testing and measurement operations (pictured) to support its development of a graphene-based biochip for point-of-care medical diagnostics. The capability has been established at a cleanroom at the University of Sydney’s semiconductor research and prototype foundry. The establishment of the facility allows Archer to progress to the fabrication of graphene transistors and their operation. The testing capability will also be used to test chip devices as part of Archer’s CQ quantum computing qubit processor development.

Molecular diagnostics company Genetic Technologies has been granted a foundational patent covering its genomics and AI based gene testing. The patent extends its methodology for identifying disease-related variations on the human genome beyond breast cancer. The company is developing a single multi-test to help physicians test for the likelihood of serious illnesses. Its patent application was submitted in 2016, demonstrating the length of time needed to achieve patent protection.

Pharmaceutical developer Starpharma has had its Viraleze antiviral nasal spray registered for sale in India. The spray which contains astodrimer sodium inactivates the SARS-CoV-2 virus within one minute. Consumers can already purchase the spray online, with the approval from the Central Drugs Standard Control Organisation allowing widespread distribution.

Drug development company Noxopharm has expanded the range of cancers it is testing in clinical trials of its anti-cancer drug Veyonda, which is a formulation of the drug idronoxil. A Phase 2 trial has been expanded from a focus on late-stage prostate cancer to include late-stage breast and lung cancer patients. Veyonda is believed to expand an immune/inflammatory response in a single lesion following low-dose radiotherapy to non-irradiated lesions elsewhere in the body. One hundred patients will be trialled who have exhausted all other treatment options.