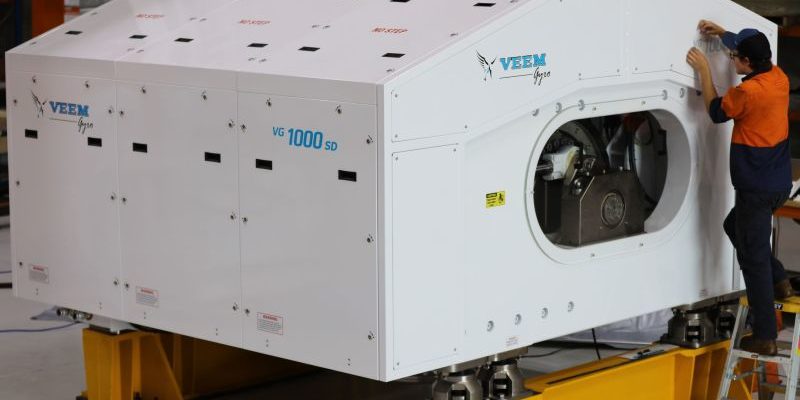 Plant protein company v2food will continue its rapid expansion with the raising of a further $72 million in capital, giving the company a valuation of $500 million. The company, which supplies plant-based burgers to Hungry Jacks, raised the funds from a group led by European venture fund Astanor. v2food, which is backed by CSIRO, has a number of research projects underway, including developing new pork type products for the China market, which it recently entered. Chinese consumers eat more than a quarter of the protein consumed in the world.

Maritime engineering company Veem has posted an operating profit up 36 percent to $10.2 million for FY21 on revenue up 34 per cent to $59.5 million. During the year the Perth company released new, larger marine gyrostabilisers – including the world’s largest (pictured) – and entered the race to make propellers for future Australian naval craft. Gyrostabilizer sales of $7.4 million were up 54 per cent on 2020 with the current value of enquires more than double that of the previous year. Net profit after tax was $4.9 million, a 97 per cent increase on 2020.

Lockheed and Grumman to battle for major defence contract

Lockheed Martin Australia and Northrop Grumman Australia are through to the final stage of the competitive evaluation process for the Australian Defence Force’s new Joint Air Battle Management System. The system, which connects ships, aircraft and other capabilities together in a way that multiplies their defensive power, is being upgarded as part of a $2.7 billion program. Defence minister Peter Dutton said the program would increase the protection of Australian deployed forces.

Nanotechnology company AnteoTech has signed a distribution with UC Bioscience for the distribution of its EuGeni reader platform and EuGeni SARS-CoV-2 antigen rapid diagnostic test in the Philippines. Singapore based UC Bioscience will distribute the products for a period of three years on an exclusive basis. With more than 100 million people, a rapid Covid test will be a useful tool in their pandemic response, according to AnteoTech CEO Derek Thomson. The signing completes AnteoTech’s distribution network in South East Asia.

The Western Australian government has brought forward another 100 places under its successful Jobs and Skills WA Adult Apprentice Employer Incentive. The first phase of 100 places, which provide up to $26,800 in adult apprentice financial incentives, was taken up in only two weeks. Among a number of workforce initiatives, the state also requested an additional 5,000 onshore places from the Commonwealth Government under the State Nominated Migration Program. Onshore visa holders are showing strong interest in filling skilled jobs in WA, according to the state government.

The South Australian Government has announced $1.5 million over two years to support the establishment of a commercial seaweed industry in the state, as well as granting two licences for seaweed farms on Yorke Peninsula. Some types of seaweed mixed with animal feed have been shown to cut the high levels of polluting methane produced in cattle farming. The state is working with CH4 Global, and has granted licences for 40 hectares for farming marine seaweeds for commercial purposes.

The NSW government has announced two schemes providing grants of between $25,000 and $1 million to access R&D by public sector researchers to develop commercial responses to the Covid-19 pandemic, and to scale innovations. The grants, under the state’s TechVouchers scheme and a new $6 million R&D fund, will address the impact of the virus on the state. They will be managed by Investment NSW. Details of TechVouchers and the R&D fund can be found here.

Quickstep to supply composites to Micro-X

Composites manufacturer Quickstep has been contracted to supply 200 additional carbon fibre chassis housings used in the world-leading Micro-X Rover mobile x-ray machine. The SA based company is a leader in lighter and smaller electronic x-ray tubes and their Rover product is being used in the global fight against Covid-19. Production will take place at Quickstep’s Waurn Ponds facility in Victoria, utilising the Qure proprietary carbon fibre manufacturing process. Quickstep CEO Mark Burges said: “There is real pride within the business that we are able to play a role in the Australian supply chain of this important medical equipment company.”