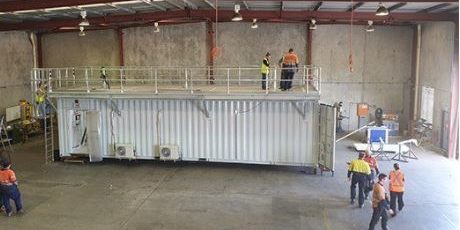 Neo-Bionica, a Bionics Institute and the University of Melbourne joint venture lab, was officially opened this week by Victorian innovation minister Jaala Pulford. Located at St Vincent’s, the new facility aims to give researchers and engineers the tools to create medical-grade devices rather than having to look overseas for prototyping, shortening the path from concept to clinical trials.

Modular data centre manufacturer DXN has signed a contract for the design, prefabrication and deployment of a modular cable landing station (CLS) destined for Ngardmau, Palau. The $1.1 million contract is the eleventh prefabricated modular CLS build contract, and includes a maintenance contract for the first year. Paulau is served by one submarine cable which provides fixed line and mobile telephony, however there is no redundancy in the system. Palau’s BSCC is constructing a second cable, the Echo Cable System which will provide direct fibre connection to Singapore and the United States. The new system is the first delivered under a trilateral infrastructure partnership between Australia, Japan and the United States.

Australian Made kangaroo gets registration in Japan

The Australian Made Campaign has announced their kangaroo logo has been registered in Japan, covering nine classes of products, including toiletries and cosmetics, pharmaceuticals, furniture, clothing and footwear, and food and beverage. “The Japanese market has long presented a great opportunity for Aussie makers and growers,” said chief executive Ben Lazzaro of the country, which was worth $53,763 million in Australian merchandise exports in 2019-2020. Registration of the Australian Made, Australian Grown kangaroo logo was carried out by intellectual property specialist Wray’s.

Applications opened this week for federal grants worth between $500,000 and $3 million under the Activating a Regional Hydrogen Industry – Clean Hydrogen Industrial Hubs program. Hub Development and Design grants offer dollar-matched grant funding, supporting industry-led consortiums with concept-level proposals. Grants aim to support advance planning and design work for such hubs, develop and/or demonstrate their feasibility, and to demonstrate the employment, knowledge, technological, public and commercial value. Applications close on November 22. More information can be found here.

French defence contractor Thales Australia has been selected to supply components for the Australian army’s new Boxer 8×8 combat reconnaissance vehicles to be built by Rheinmetall Defence Australia (RDA). The company will leverage its extensive Australian supplier base to deliver components for the Boxer’s MK 30-2 cannon, which will be assembled at RDA’s Military Vehicle Centre of Excellence in Redbank, Queensland. Sixteen SME sub contractors will conduct 50 per cent of the work on the cannon, according to Thales, which itself manufactures armoured vehicles in Bendigo, Victoria. Thales’ weapons components recently passed quality control checks by Rheinmetall in Germany. Defence industry minister Linda Price said ‘the overall Australian industry capability (AIC) ratio’ had surpassed 85 per cent.