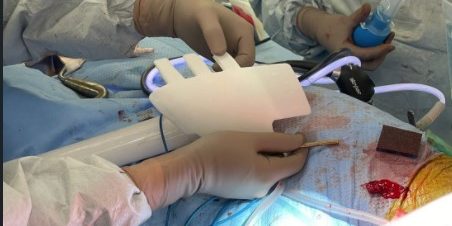 Santos and CSIRO back carbon capture and storage

Oil and gas producer Santos has announced a $220 million Moomba, South Australia carbon capture and storage project to store 1.7 million tonnes of carbon dioxide a year from 2024, making it one of the largest in the world with the lowest unit costs, according to the company. Santos said it could eventually have the capacity to sequester as much as 20 million tonnes of carbon dioxide a year in underground oil and gas reservoirs. At the same time Santos and CSIRO have joined in a trial of technology that removes carbon dioxide from the atmosphere and pumps it underground. The collaboration will develop ‘direct air capture’ technology with carbon dioxide sent to Santos’s Moomba project.

Melbourne medical technology company Anatomics has developed a world-first 3D printed thoracic case implant (pictured) in association with surgeons Dr Michael Harden and Dr Randolf Grey. While Anatomics is used to firsts – its parts are printed based on individual patient medical imaging data – the thoracic case articulates with the spine after resection of a large tumour, according to company founder Paul S D’Urso. “It’s really cool that StarPore polymer tissue scaffold allows tissue integration and is invisible in the post operation chest X-ray. You can only see the screws that fix the implant tulips to the ribs.” Anatomics supplies surgeons around the world with bespoke implants and also provides design software and surgical tools. The company recently moved implant manufacturing to the Assemble Incubator at Bentleigh East, Melbourne, an urban renewal initiative designed to transform underutilised warehouse space.

WA innovator of the year is Vision Pharma

Vision Pharma has been named the WA Innovator of the Year 2021 for developing the world’s first precision medicine to treat the blinding eye disease Retinitis Pigmentosa type 11. Its VP-001 drug combines research from Murdoch University with Vision’s drug delivery technology to correct the effects of a genetic mutation which causes the most common form of inherited retinal disease and blindness. Winners in five other categories were Roofus Tools Pty Ltd for their carpentry tools, Navier Medical for 3D heart imager, VeinTech for their VeinWave cannulation product, VitalTrace Pty Ltd for their novel device for monitoring babies during childbirth, and Sapien Cyber Ltd for their building management systems cyber security project.

Australia and Singapore are negotiating a Green Economy Agreement (GEA) to increase trade and investment in environmental goods and services, while also addressing environmental issues, including climate change. DEFAT said the GEA would look at ‘practical initiatives’ to accelerate the uptake of low-carbon and green technologies and reduce barriers to renewable energy trade and investment. It was also build on our strong trade and investment relationship and support economic growth and job creation. DFAT is calling for submissions from industry, business and community organisations which can be accessed here.