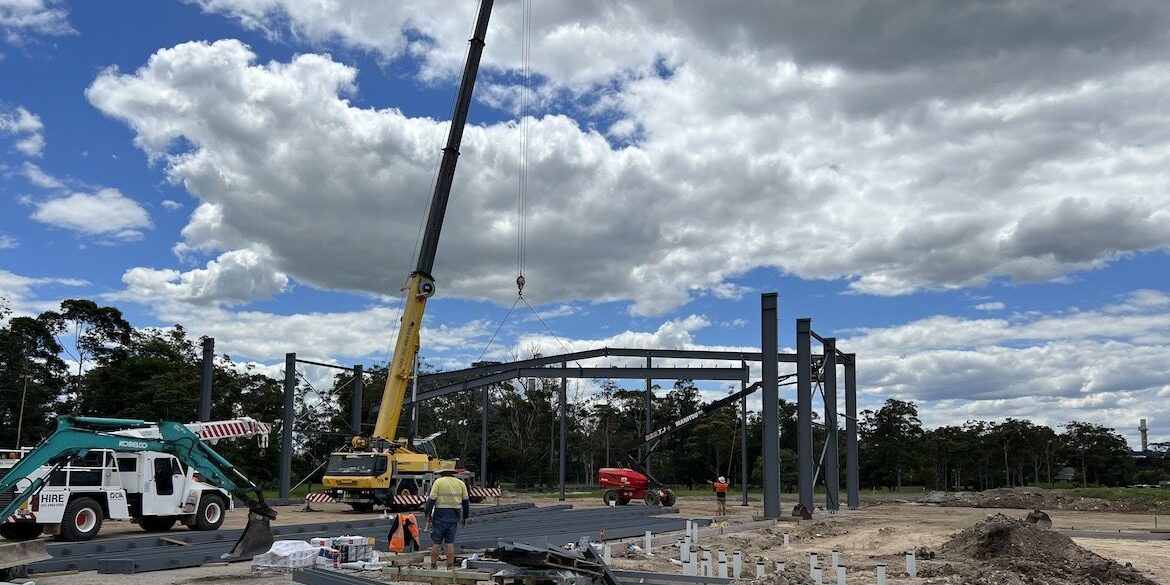 Energy Renaissance is pressing ahead with construction of Renaissance One, the company’s lithium battery production plant in Tomago, NSW. The company said work at the site (pictured) was picking up pace, with development partner ATB Morton now erecting steelwork. “Over the next few weeks the facility will start to take shape. In the meantime, we continue the commissioning process out of a smaller dedicated facility nearby – we call it Apollo. Stay tuned for more updates as work at Apollo and Renaissance One accelerates. The temporary facility will support the rollout of our first batteries.”

Off grid security and IoT solutions provider Spectur has signed a two-year master-agreement with Singapore Telecommunications to provide IoT security options for its subsidiary Singtel Optus. The company will provide Spectur hardware, services and software subscriptions to protect and service remote Australian telecommunications assets. The company already utilises 49 Spectur systems which have earned the company $239,000, with new installations to total $838,000. The next stage involves the rollout of 66 additional systems. Spectur managing director welcomed the Optus rollout at scale. “Spectur continues to engage with other utilities providers around supplying similar services that have been demonstrated a beneficial outcome.”

The Western Australian government has established a new land tenure regime which appears to open the way for very large-scale renewably powered green hydrogen projects. The government amended the Land Administration Act providing greater certainty for the construction of upstream renewable power generation assets and green hydrogen production facilities. A new form of tenure called a diversification lease has been established which are potentially non-exclusive, allowing coexisting land uses such as pastoral leases. Province Resources, which is developing the HyEnergy green hydrogen project in the Gascoyne region supported by 8GW of renewables said the reforms would enhance the development of green industries. Traditional owners retain a key place in WA’s new arrangements.

Perth robotics company Chironix will deliver casualty evacuation services to the military under a contract to the US Navy’s Office of Naval Research. Chironix will develop technologies to evacuate casualties from a battlefield or disaster zone. Their robots would deliver ammunition or supplies to the front, and retrieve casualties on the way back – autonomously. Crironix is a systems integrator which builds hardware and software solutions drawing on leading robotics and sensor manufacturers. The contract was awarded under Project Simpson, a tribute to Gallipoli stretcher bearer Jack Simpson.

Rio Tinto is to invest in up to 5GW of renewable wind and solar power for its Boyne Island and Tomago aluminium smelters and 1GW for its Pilbara iron ore mines in Western Australia. The global company plans to spend $10 billion to cut its scope 1 and scope 2 emissions by half by 2030. The plan also includes investments in green steel and green aluminium, replacing gas power. The company will also electrify its Pilbara trucks, mobile equipment and rail operations. Total Australian renewable ambitions are more than 7GW.